Amazon.gov: A Social Safety Net for the Digital Age

Left out of the tech boom? Outsourced or can’t code? For those failing to adequately tap into the new economy, Amazon has taken on an eerie role that may be a harbinger of things to come. In the midst of their ongoing expansion, they’ve purchased property where a Travelodge hotel once stood in Seattle’s downtown South Lake Union neighborhood, transforming the building into a high-tech homeless shelter. A temporary shelter that is; one year from now, when it is no longer convenient, shelter.com is slated to be abandoned in favor of incorporating the property into the ever-expanding Amazon corporate campus.

The 34,500 foot space is indeed a welcome support for the 60 to 70 families per night who take shelter there. From 5 PM to 8 AM on weeknights, and throughout the weekend, families in crisis find respite from the streets and the overcrowded Seattle municipal shelter system, which is so underfunded that many people are forced to sleep in chairs.

Likewise, the facility serves as a vital support to Amazon’s ailing PR image, as the tech behemoth seeks to recover from controversies such as sales tax evasion and scathing exposés revealing harsh warehouse working conditions. Lending the unused building to Mary’s Place, a local non-profit battling Seattle’s homelessness epidemic, helps quiet the growing sentiment that Amazon has little regard for the community beyond its fortress headquarters. Seattle Times headlines such as “Amazon a virtual no-show in hometown philanthropy” move further down the search engine rankings, replaced with glowing op-eds.

Whether an altruistic example of corporate generosity, a crass and convenient attempt to quell negative press, or a bit of both, a broader issue lies ahead. The stark irony of a tech giant housing those who live at the very opposite end of the socio-economic scale epitomizes the deep divide between the haves and have-nots—a chasm that has arguably been exacerbated by the tech empire. The optics conjure up images of a dystopian future in which Yahoo buses, after shuttling San Francisco’s upwardly mobile denizens back home from Sunnyvale, become the only affordable housing left in a city steamrolled by gentrification. 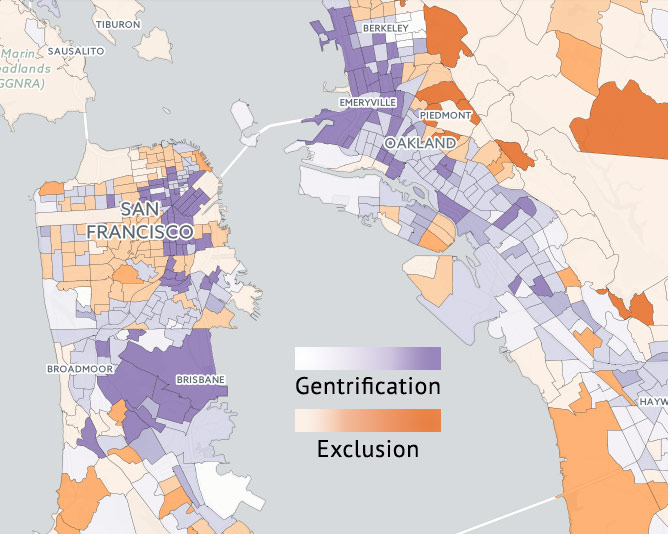 Such a scenario may not be far-fetched. A number of San Francisco city buses are now used as showers for those living on the street. That may be admirable and practical, but it’s also unnerving in its resignation to entrenched poverty and deficiencies in social services. Perhaps such mixed-use solutions will become the norm further up the economic ladder, as middle- and working-class residents strain against inevitable inflation in a region awash in industry-specific wealth.

Boom or bubble, the implications of the unprecedented rise of technocracy cannot be ignored. Accusing one sector without accounting for factors like trade and tax policies places undue weight on a single trend. Yet, a look at the data reveals a stark and disturbing reality about certain monocultural economies like that of Silicon Valley. Outsized salaries and soaring rents (currently a monstrous $3590 for a one-bedroom in San Francisco) openly coincide with mass evictions and relocations, as visualized in vivid detail by UC Berkeley’s Urban Displacement Project Map.

Will the Amazon-as-social-service model progress beyond the tech hubs, out to larger swaths of the American landscape? The mismatch between innovation-induced prosperity and economic hardship does appear to be spreading. Consider a city such as Reno, Nevada, where the arrival of Tesla and Apple has brought optimistic revitalization efforts to the struggling city. Downtown Reno is actively striving to become what NextCity.org describes as “an area where local businesses can thrive and where an increasing number of amenities will satisfy the young entrepreneurs and tech workers that the city wants to retain.” With Startup Row replacing skid row, the question remains whether the gains will be felt by the majority of Reno residents. There, fewer than one-third of adults possess a bachelor’s degree, eminent domain has demolished areas of low-income housing, and rents have spiked approximately 25% over the last few years. Reno’s a bargain for those it wants to attract, and increasingly unaffordable for those it doesn’t.

Amazon operates a sizable fulfillment center at an industrial park in northern Reno. Considering that the company pays distribution center wages that are lower than Wal-Mart’s, it may only be a matter of time before the 630,000 square-foot facility doubles as emergency housing for the very workers it hires.

Much like Seattle’s corporate homeless shelter, it’ll be called a win-win.