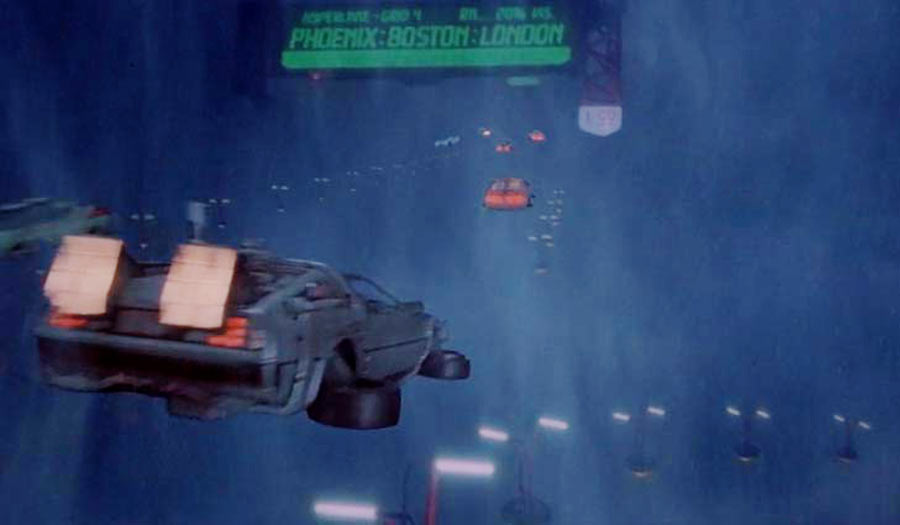 The Retroskeptic: Back to Back to the Future

As perhaps you have heard, 2015 is a notable year for pop-culture enthusiasts: we have finally arrived at the future depicted in Back to the Future (specifically, Part II). If you’re one of the seven people unfamiliar with the movie franchise, you might want to get up to speed elsewhere (specifically 88 MPH—you’ll understand later).

Even at The Technoskeptic we like to have a little fun, and there are not too many things more fun than looking back smugly at the folly of poor, ignorant souls trying to predict the future. Because they always get it wrong, and we are all magically enlightened by the passage of time—even if the “they” and the “we” are the same people.

Back to the Future Part II has an interesting mix of overestimates and underestimates of technological progress. On the one hand, its 2015 has flying cars, robot dog-walkers, giant holographic projections, a mini fusion generator, and hover-boards. These items are consistent with a classic mistake of futurist fiction: things change too much and many of the changes belong to a strand of comic-book progress that is heavy on toys. 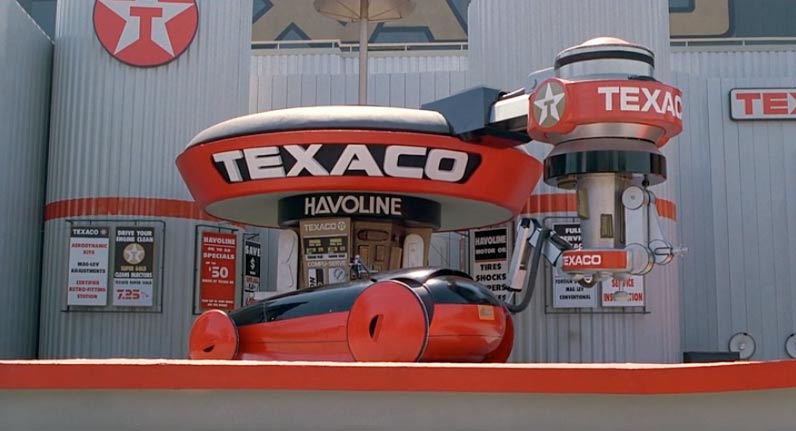 © Universal Pictures. The robotic filling stations and super-cool cars we still don’t have.

On the other hand, the film was unable to even imagine the Internet or cell phones (there is a phone kiosk visible in one shot, although admittedly a few of these relics do still exist). The low-def video, incandescent police lights, reliance on newspapers, and number of fax machines also betray the era in which it was made.

Meanwhile, in reality, fashion tends to recycle even the most objectionable trends (see: tube socks). In the forward-thinking mid-20th century, the people depicted in the filmic future often wear jumpsuits, unitards, or robes in white or neutral solid colors. Back to the Future Part II doesn’t make this mistake (what exactly would prompt us all to suddenly, uniformly ditch pants?) but it does exaggerate our interest in novelty, with self-lacing sneakers, a self-adjusting/drying jacket that talks, and the still unrealized style of wearing two ties simultaneously. Too bad Marty didn’t realize that fashion thirty years from 1985 would look suspiciously like it did in, uh, 1985. He could have grabbed a pair of pegged pants, a skinny tie, and some checkerboard Vans from his closet and fit in perfectly. 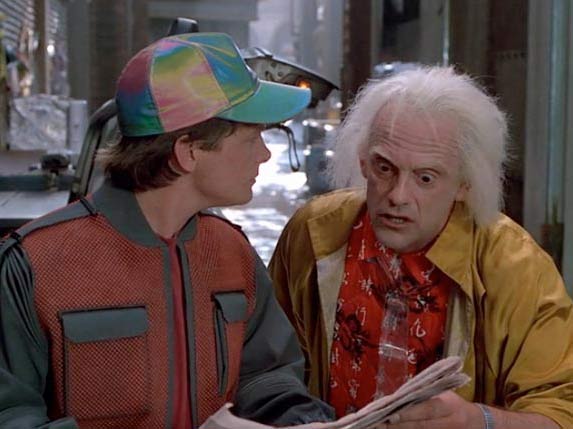 © Universal Pictures. Somehow, opalescent baseball caps and see-through neckties have yet to catch on. 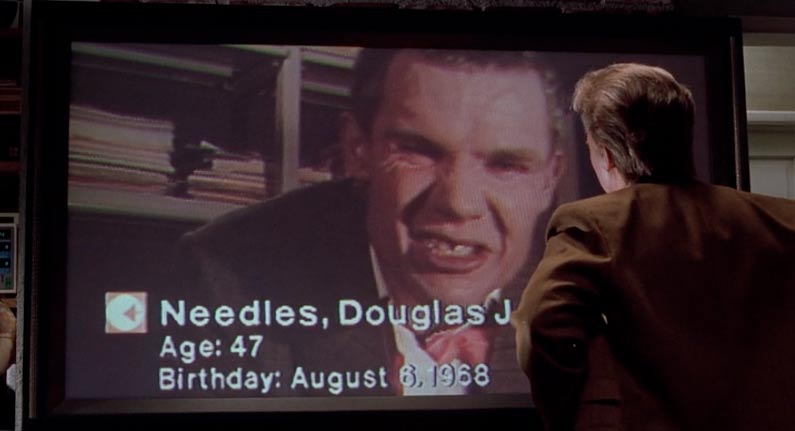 To be fair, there are certain things the film gets right. The big wall-mounted wide-screen TV chez McFly (with the correct aspect ratio!) hits the nail on the head. As does the Skype-like conversation Marty has with a colleague while his name and biographical tidbits, Facebook-like, appear on-screen beneath him. The movie also really does well in making the 2015 Hill Valley appear as an overlay of new and (mostly) old. The home decor pictured is frumpy, not futuristic, a pretty accurate portrayal of an average middle-class house today.

The best prediction in the film, though, is that the Cubs would win the 2015 World Series—over Miami. Keep in mind not only that the Cubs have not been baseball champs since 1908, but also that Miami’s team did not exist when the movie was made (the Florida Marlins were part of Major League Baseball’s 1993 expansion, renamed the Miami Marlins in 2012). Though that matchup is currently impossible since both teams are in the National League, in the pre-season, Sporting News actually picked the Cubs to win it all this year. Given that the story line of the film hinges on the villain Biff making his fortune on sports betting using an almanac of 20th-century game stats that he gives to his 1955 self, this outcome would be an incredible meta-thematic triumph. For the moment, however, my money’s on the Royals.

Are some of the more advanced items depicted in the movie likely to come to pass in the near future? There are a few companies now making prototype flying cars (Terrafugia, Aeromobil), but considering you’d still need to drive to an airport, transform the vehicle, have a pilot’s license, and deal with prohibitive expenses, this is a hardly an imminent mainstream transportation solution. Cold fusion may be on a path to regaining legitimacy, according to a Wired article earlier this year, but after a hyped and widely discredited 1989 experiment, it has a massive amount of skepticism to overcome.

But who cares? Time travel movies are fun because you get to imagine what your future might be like or how it would feel to revisit your past. I was almost exactly the same age as Marty McFly when the first film came out in 1985. When he traveled to 1955, the world of poodle skirts and soda fountains seemed impossibly distant to me. Now, the equally distant 1985 seems confoundingly real and not nearly as far. I also have no interest in ever going back there.

So is there anything of significant value to be learned from rewatching Back to the Future Part II? Probably not. But it does make you appreciate that time travel is, in fact possible, at least in one direction. Just wait a while. 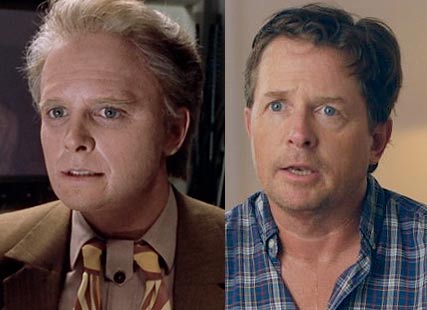