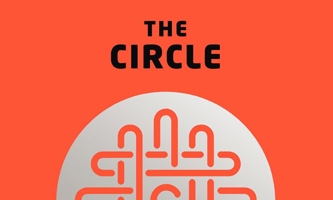 Dave Eggers might be preternaturally drawn to calamities. As his memoir, A Heartbreaking Work of Staggering Genius, tells us, he came of age in the midst of one; he lost both parents to cancers nearly simultaneously and ended up raising his own brother mostly by himself in his early 20s. His other non-fiction book, Zeitoun, is about Hurricane Katrina.

Despite or perhaps because of this, Eggers seems driven to accomplish much and use writing as a social tool to build community. He founded the literary journal and publisher McSweeney’s, which exposed people to new writers. He started a now nation-wide network of non-profit youth writing centers. He launched Might magazine and The Believer, the latter dedicated to long-form writing and interviews in support of whatever art and prose attracts them.

In this context, The Circle, Eggers’s latest novel, provides some continuity as it tries, occasionally too hard, to awaken people to our communal calamity: the dangers of technology, corporate greed, and the loss of honest, deep connection.

The story’s protagonist, Mae Holland, is a post-collegiate boomeranger in a dead-end cubicle job when she gets plucked from her debt-riddled aimlessness and offered a position by her close friend Annie Allerton. Since graduating, Annie has moved to the inner sanctum of the hottest tech company in Silicon Valley: The Circle.

A sort of Google-Apple-Facebook hybrid, The Circle has subsumed all of those services and more, becoming the de-facto locus for almost all networked activity in the world. With its TruYou technology, it has created one single account, identity, password, and payment system—with your verified real name—for everything: “One button for the rest of your life online.” Its all-glass campus is both metaphor for ultimate transparency and also the envy of employees everywhere.

As Mae arrives her first day, her tour guide Renata shows her an Alexander Calder sculpture. “I love Calder,” says Mae, to which, in an ominous harbinger of things to come, Renata replies, “I know you do.”

The Circle progresses from there, picking up the threads of social media obsession, the compulsion to document and measure, the sanitization of danger, the consolidation of corporate power, and of course, the total loss of privacy.

This is the surveillance state turned inward—with everyone both the voyeur and the watched. While much has already been made of our voluntary participation in this data-gathering, the novel’s eponymous corporation offers a twist: it promotes a culture which not only values transparency, but equates lack of sharing to theft—the keeping of valuable information to yourself that should be available to everyone. The cult-like way this viewpoint is gradually inculcated in Mae is perhaps the novel’s greatest strength.

Of course the side effect of all of this information, sharing, and commenting is that everything is reduced to a near-meaningless world-spanning stream of superficial babble. This is made visible in the book as more and more screens are added, almost comically, to Mae’s workstation. As her ex-boyfriend Mercer says, “…the tools you guys create actually manufacture extreme social needs.” The Circle weaves a never-ending loop of information feeding obsession feeding more information. A person’s ability to think quietly, to be present, to be human, is lost.

Handled well, an exploration of these themes, so very specific to this particular moment in time, could be the makings of a generational touchstone, a work that defines the challenge of our age. Unfortunately, reading like a didactic young-adult novel, The Circle doesn’t rise to this level.

Eggers’s writing, while sometimes polarizing, can be very personal and very powerful, traits that were harder to find in this book. The characters often lack a sense of depth or authenticity and situations can seem contrived. In particular, Mae is notably un-exceptional, slightly dim, and even boring—a point which advances some of the themes being explored in the book. However, it simultaneously undermines the reader’s credulity that she would rise so quickly through the ranks of a Silicon Valley tech behemoth crammed with over-caffeinated and media savvy twenty-somethings. From a story-telling perspective it is also hard to latch onto a protagonist who provokes so little emotion one way or the other.

The plot is propelled forward by the increasing transparency of the world created by The Circle’s products (including, for example, 24-hour cameras worn by people to prove they are acting appropriately at all times), Mae’s ever-growing role at the company, and a modest mystery related to a man named Kalden whose true identity is saved for the final pages. While I was never bored, I would hardly call it, as the dust-jacket does, a “heart-racing novel of suspense.”

As pure work of fiction then, The Circle doesn’t really work. But of course Eggers is after bigger quarry, which is the tech sector and its addictive, intrusive death-grip on our brains, our information, and ultimately our humanity. In this sense the book aims to update Orwell, or to do for technoskepticism what Ayn Rand did for libertarianism.

In that regard, one of the surprising things about The Circle is that it doesn’t go very far. Many of the invasive features of this near-future, such as ubiquitous cameras and implantable chips, are already at hand. It does not require too much of a stretch to envision many of the fictional uses of these technologies coming to fruition. On the one hand, that made the book scarily plausible. At the same time, it could suffer from a lack of imagination. For example, when a new system is proposed to allow police to quickly identify potential suspects in crowds, it worked via bracelets or anklets that prior convicts were forced to wear, not via facial recognition, which is already actually in use. In another, one of The Circle’s triumvirate of leaders introduces their new lollipop-sized SeeChange cameras, saying “Would it surprise you to know that this isn’t coming from a big camera, but actually just one of these?” Knowing that there are already HD cameras the size of a pea in most people’s cell phones, this seemed strangely out-of-touch.

Ultimately I did find myself becoming nervous that some of Eggers’s imagined applications would be actually adopted by real companies or individuals, the way one can now buy Bertie Bott’s Every-Flavour Beans, thanks to Harry Potter. That is a testament both to how close Eggers hews to the believable and also how little I trust marketers, consumers, or government to make thoughtful choices. It also makes me wonder if technophiles reading this book will even feel threatened by the imagined transgressions of The Circle. They might just use it as a playbook instead.

Whether or not Eggers anticipated that, the fears he expresses through the device of the dystopian novel relate to true dangers, not just in some distant future, but today and tomorrow and in the next five or ten years. This could have provoked an extremely dark tale of enslavement, violence, or life-draining boredom. But unlike Orwell’s 1984, where we identify with people who are knowingly oppressed, The Circle instead unfolds the increasingly intrusive technologies in the context of enthusiastic adopters. While there are a few characters who object, their objections are both tiny and ineffectual. Mercer, a back-woods man who makes art out of antlers and attempts to escape the ever-probing eye of The Circle, is ostensibly the conscience of the book and its John Galt. Eggers offers him a platform to expound on the moral failings of the system the book describes. These few screeds are mercifully brief compared to Galt’s unreadable 40-page manifesto in Rand’s Atlas Shrugged. But the effect of them, in that they are transparent soap-boxing and render the character rather unlikable, is to undermine the ostensible viewpoint of the author.

That’s a shame, because the themes that Eggers begins to explore are ones that desperately need exploration. What is the end game of our technologies? What happens when power is consolidated in one entity? Are we cheapening our relationships with obsessive, superficial interactions? What is the implication of knowing everything (or thinking we do) on learning, decision-making, creative thinking? What does removing danger mean to free will or even being human? What happens when we no longer have the choice to opt out?

While Eggers deserves credit for raising these issues, in the end, The Circle doesn’t compellingly address them. Given that, I might have preferred to read a passionate personal defense of Dave Eggers’s moral philosophy rather than a fictionalized version of the world after its rejection.