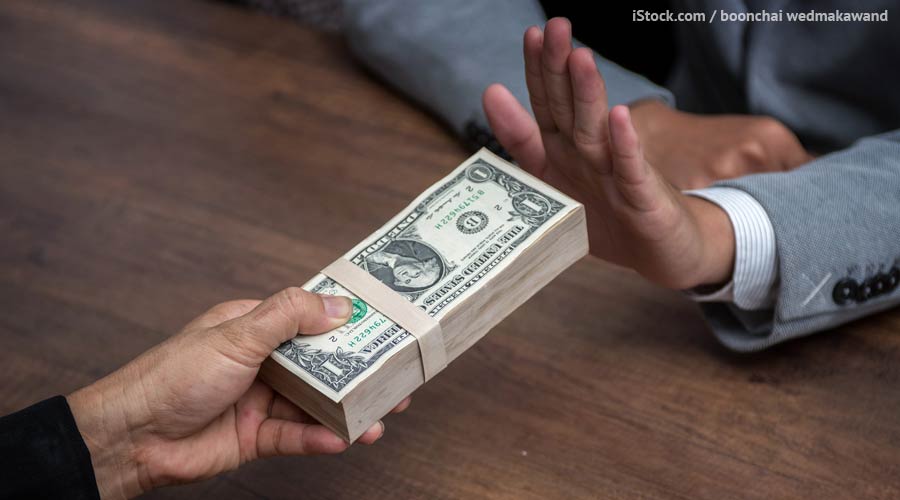 For anyone who’s read the small print on a dollar bill, it would seem that cash cannot be refused in America. After all, it says right there in the upper-left quadrant: “This note is legal tender for all debts, public and private.”

But tell that to Amazon, which is experimenting with brick-and-mortar convenience stores that not only don’t take cash, but require a smartphone app and an Amazon.com account to shop there. Likewise, there are individual restaurants and even chains like Sweetgreen that require payment with credit or debit cards or an app. And if you fly Southwest (among other airlines) your cruising-altitude cocktail can only be bought with a card or coupon.

What’s the deal? Well, it turns out there’s a difference between dollars and dollar bills, according to the US Department of the Treasury.

“This statute means that all United States money as identified above are a valid and legal offer of payment for debts when tendered to a creditor,” the Treasury website reads. “There is, however, no Federal statute mandating that a private business, a person or an organization must accept currency or coins as for payment for goods and/or services.”

In short, your landlord cannot charge your rent in euros, and your credit card company can’t insist on payment in yen. But your local transit agency can say no to paying your fare in pennies, and your corner store can refuse to take bills larger than $20.

And that can mean bad news to people for whom cash is both a necessity and a rarity, such as the poor and those who don’t have bank accounts, said Caroline Ratcliffe, co-director of the Opportunity and Ownership Initiative at The Urban Institute. “It can be expensive to be poor, and moving to a cashless economy is another example of where it could negatively impact lower-income consumers and their finances,” Ratcliffe said.

And that’s a considerable chunk of the population. According to the latest census figures, there are nearly 40 million Americans living in poverty. And while there isn’t necessarily a direct correlation, many of those likely fall into the ranks of the unbanked (no bank account of any kind) and underbanked (having a bank account but also obtaining financial services or products outside of the banking system). The FDIC reports that as of 2015, 7 percent of US households were unbanked, representing 15.6 million adults, while nearly 20 percent were underbanked, representing 51.1 million adults. Blacks, Hispanics, and Native Americans were the most likely to be underbanked.

To Ratcliffe, many of the conveniences and options that are being put forward by banking institutions will actually impose barriers upon the poor. “Really, when we think about it, if we move to a world where we’re just taking credit cards or bank cards or prepaid [debit] cards, there can be fees associated with those,” she said.

For example, a prepaid card may well function like a bank account for the unbanked, said Ratcliffe, but some of those come with monthly minimums for both deposit amounts and number of transactions if fees are to be avoided. “A higher-income customer is more likely to meet those criteria than a lower-income customer,” she said, which means they’re incurring extra costs that wouldn’t exist if they could’ve paid cash.

While the federal government doesn’t provide any relief for citizens who, whether by preference or necessity, want to do business strictly in cash, it does allow states to pass laws requiring currency be accepted. However, only one has such a law—Massachusetts—and while it mandates that “no retail establishment offering goods and services for sale shall discriminate against a cash buyer by requiring the use of credit by a buyer in order to purchase such goods and services,” it doesn’t delineate what businesses fall into those categories, nor what mechanism exists for enforcement.

When asked for clarification on those factors, the state Attorney General’s office responded with a statement: “Advances in technology are improving businesses practices and changing the way people conduct everyday transactions. The [Attorney General’s] office is continuing to learn more about these types of practices—but as far as enforcement is concerned, we are hoping to encourage new technologies while striking a balance that allows all consumers to fully participate in business transactions.”

There are two ways a cashless economy could come about, suggests William Luther, director of the Sound Money Project at the American Institute for Economic Research and an adjunct scholar at the Cato Institute. One is through government action, and the other is when individuals and businesses decide alternative payment technologies are superior to using or accepting cash. While Luther is okay with the latter, the former represents some serious concerns.

“It seems very unlikely to me we’re going to make individuals better off by reducing their choice set, restricting the decisions they make about spending,” said Luther, who is also an assistant professor of economics at Florida Atlantic University. “Just on a baseline practical level, we look out at the world and see some people choose to prefer cash.”

The reasons are manifold. Some people don’t use banks, some like to do their budgeting in cash so they cannot overspend—and some simply prefer the privacy that cash transactions offer.

Luther sees “levels” of desired privacy for cash-users. “Think about the three realms of your life,” he said. “Your personal life, your relationships and so on; your commercial life, which is your relationships with the financial system and companies you transact with; and your public life, your interactions with government.” 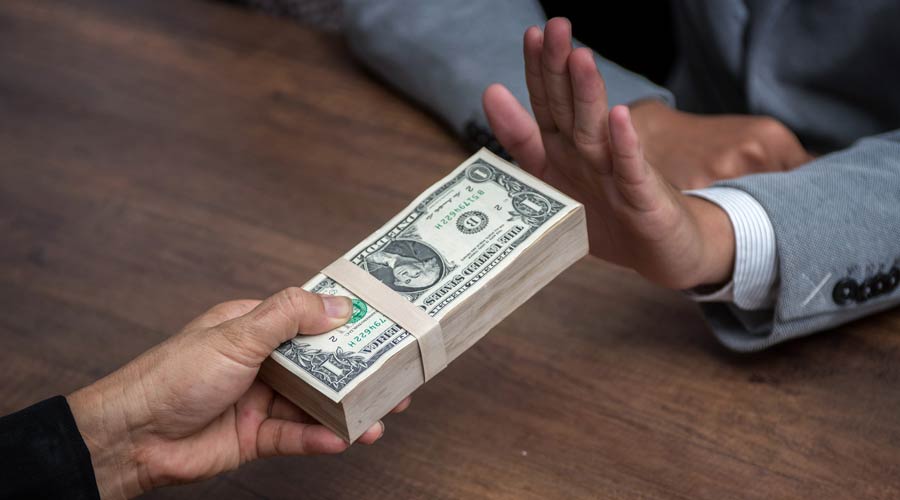 The simplest desire for security is for personal transactions—if you’re buying your spouse or partner a gift and have a shared bank account, for example, using cash can preserve the surprise. From there, the reasons for wanting privacy escalate.

“Some who want privacy may fear that opportunistic business or banks might take advantage of them if those entities have sufficient information about them,” Luther said. “If that’s a concern, you want to conduct transactions in a way that [doesn’t] reveal your preferences—what you purchase, where you’re located, where you conduct most of your transactions.”

Finally, there are those who fear government scrutiny of their transactions. “I don’t think in the US that’s a big concern for most people,” he said. “But there are places around the world where you don’t want the government to know you’re buying books that are banned…or if you’re funding political events or discussions.”

All things considered, Luther believes it might be hard to derail a movement toward a cashless economy. “The 500-pound gorilla in the room is the relationship between crime and tax evasion and cash,” he said. “No doubt cash is used to facilitate some criminal activity, and is used by some businesses and consumers to evade taxes.”

Indeed, a common argument in favor of removing large-denomination bills from circulation or eliminating cash altogether is that it will make drug dealing, for example, much more difficult. And without the ability to stash away large sums of money in cash, it will be harder to hide income when tax time rolls around. Luther, however, argues that the benefits won’t come close to outweighing the adverse impact. “The problem is,” he said, “to stamp out a little bit of crime and tax evasion, you have to impose pretty significant costs on relatively low-income individuals who are conducting lawful transactions in cash. And I can’t support that.”

Donald Hunt, a postdoctoral research fellow in criminology at Georgia State University’s Andrew Young School of Policy Studies who also studies cashless economies, agrees the move to a cashless economy is less likely to be a matter of policy than of inevitability, driven by technological advances. But he thinks that shift might actually prove advantageous to the poor and unbanked.

For instance, employers could provide paychecks in the form of a preloaded debit card, which can be spent directly by those who don’t have bank accounts. And going cashless can help remove the stigma of being on public programs like nutritional assistance, Hunt said, since recipients just slide a benefit card through a reader like anyone paying with a debit or credit card.

But even for those who don’t participate in those programs, Hunt said, there will always be some optional form of cash around. “Prime example: most waitstaff prefer tips in cash, or you have a handyman who says he can take a credit card but will charge you 20 percent less if you pay in cash,” he said. “What this will look like may not be cash itself; it may be cryptocurrencies—I’m guessing that’s where it will probably go—or other types of monetary instruments.”

But cryptocurrency is digital, and digital means you need Internet or cellular data access. And those aren’t always affordable or, in some regions, widely available, noted Terri Friedline, a research fellow in the Family-Centered Social Policy program at New America, a think tank that focuses on issues of social and technological change.

“In terms of going cashless and using technology for transactions, cheaper, more affordable, and more reliable Internet is really important,” said Friedline, who is also an associate professor at the University of Michigan. “Keeping cash as an option in retail and at bank branch establishments is really important because not everyone has yet made the transition to a cashless society.”

Even mobile banking, which promises the ability to access your money anywhere and anytime, could eventually become a barrier to the poor and unbanked, again due to the potential expense of cellular data plans. “If you don’t have an unlimited [data] plan,” Friedline pointed out, “toward the end of the month you could lose access to your money in your bank account.”

And that comes back around to a concern raised by the Urban Institute’s Ratcliffe—that a broader population than anticipated might be negatively impacted by a cashless economy. “When you step back and think about the kid who’s mowing the lawn and how they’re going to get paid and spend that money, it puts up barriers,” she said. “And if we think about older people being even more vulnerable in our economy, moving to a cashless economy would just make it more expensive…. It’s just another way where the consumer can be hit.”