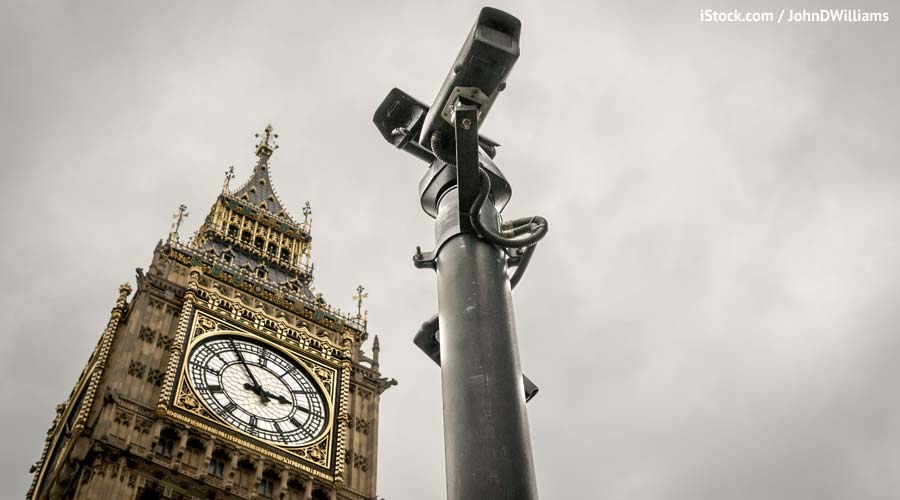 CCTV: A View on Surveillance From Britain

As a habitué of dissident circles in Yugoslavia, Slovenian philosopher Slavoj Žižek experienced first-hand the surveillance gaze of a totalitarian regime. However, he later said he was not particularly bothered by it. In a 2014 interview he suggested, in his trademark exuberant, tongue-in-cheek style, that surveillance by secret police should be treated like a dog walking in the room while we are engaged in intimate activities: we realize that they see us—but we should not care, as long as they don’t switch from watching to actively interfering.

There are obvious holes to Žižek’s analogy (which admittedly should not be taken too seriously in the first place): how did he know that the secret police would not, at any moment, walk up and arrest him? Besides, even if the police never decided to act, wouldn’t the fear of arrest be enough to make someone self-conscious and alter their behavior?

Yet Žižek’s provocative words, whether one agrees with the attitude or not, do point to the elephant in the room (to keep in line with the animal metaphors): even in societies where surveillance is pervasive, we often go about our business as if we were not watched, the way Žižek preaches. This is especially true of closed-circuit television (CCTV) surveillance in public or semi-public spaces (like malls, or the city of London). We often do activities—kissing with our partner, picking our nose, perhaps even rolling a joint, if we live somewhere where possession is not criminal—under the gaze of cameras that we normally would be uncomfortable doing in other people’s line of sight.

CCTV is a perfect example of the panopticon as described by Jeremy Bentham in the late 1700s. It provides a window into every hidden corner while not letting those in its line of sight know whether they are, at any particular moment, the focus of attention. Yet while Bentham’s panopticon was conceived to keep prisoners constantly on edge so that they did not misbehave, the implicit discourse of CCTV can be read differently. Please behave as you normally would, the cameras seem to say while they stare at us in the station’s waiting room, and don’t mind us. After all, if you have nothing to hide, you have nothing to fear.

While such an affable statement is patently false in case of an authoritarian government like China’s, it might carry a degree of honest intention when advocated by representatives of a liberal democracy that see it as the most immediate solution to threats of terrorism or crime. Authorities may legitimately want to protect citizens’ safety by expanding CCTV coverage of public spaces, but at the same time they need to reckon with the right to privacy. This can create serious internal tensions in a society, especially in post-2001 democracies, where security and privacy are often said to be at loggerheads. Indeed, a security consultant working with the NSA told the New Yorker in 2008, “We have a saying in this business: ‘Privacy and security are a zero-sum game.'”

But if some firmly choose one side of that equation, others deny that the two are opposed in the first place; security blogger Bruce Schneier calls it a false dichotomy, arguing that both security and privacy form part of the bigger paradigm of “liberty.” The fact that even in societies with serious internal threats, privacy is not always waived away as a luxury of the old, peaceful days should tell us something about its intrinsic value.

The United Kingdom is a country that has gone to great lengths to bury the perceived dilemma between surveillance and citizens’ rights. Though data varies considerably depending on the source, the British Security Industry Association in 2013 put the number of CCTV cameras in the country at between four and six million—around one in every ten citizens. Such a massive number of cameras in an accountability-based democracy has inevitably been the subject of frequent concerns. Luckily, it was not just concerned citizens who took issue, but authority figures as well.

Since 1998, every European Union country has had to appoint an independent watchdog that deals with citizens’ data protection. During and after his 2002–2009 tenure as the UK’s Information Commissioner, Richard Thomas repeatedly warned British institutions about the risk of “sleepwalking” into a surveillance society. His choice of words points to something liberal nations should always keep in mind: it does not take a ruthlessly Stalinist, all-powerful mastermind to engineer an Orwellian society. Such a state can easily arise from a series of seemingly well-intentioned steps. 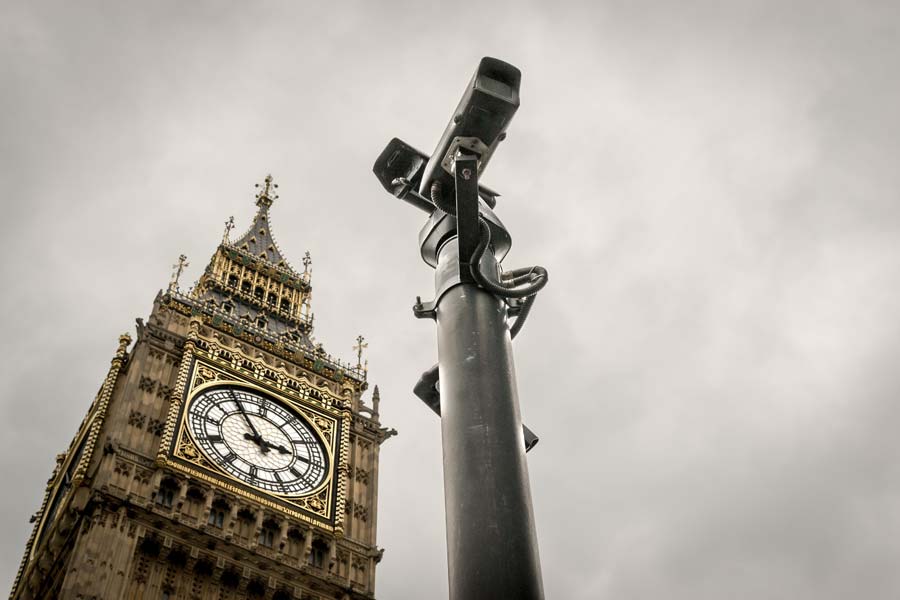 Interestingly enough, the examples Thomas gives of intrusive policy proposals that had to be stopped by his office all involve regional or city-level authorities rather than national ones. In one case, a local council wanted to equip cameras with microphones, to record conversations on top of footage, which Thomas’s office deemed unacceptably intrusive. In another case, councils wanted to make having on-premise CCTV cameras a prerequisite for a pub’s license to operate. Again, Thomas warned policy makers to tread carefully: cameras could be legitimately installed in exceptional cases, like pubs that are hotspots for crime and antisocial behavior, but could not be made mandatory.

It is easy to forget about the value of privacy when one lives in a liberal democracy, where abuses of surveillance beyond the rule of law and leaks to parties with a defamatory agenda are the exception rather than the rule. Indeed, at times an eerily, shall we say, populistic, bottom-up drive for more camera coverage emerges that verges on moral panic. Thomas experienced firsthand the tension between popular appeasement and safeguarding liberties. “It’s safe to say that CCTV is quite popular with the general population,” he says. “I remember sitting in front of a Parliamentary committee, giving some of the warnings about CCTV, and one of the committee’s members then said, ‘Well, it’s all very well that you are concerned about privacy, Mr. Thomas—but my constituents want more CCTV, not less.’”

But risks do not just stem from the number of cameras around. Thomas, who is currently global strategy advisor at think tank the Centre for Information Policy Leadership, says that although he is not up-to-date with the statistics, he reckons there are no more nor fewer cameras than when he left the role of Commissioner. What has changed is the amount of information that can be acquired through those cameras—what machines can read into the footage. Car plate recognition is now a routine application, as Thomas had predicted it would be ten years ago. And facial recognition, though still a developing technology, will soon be another asset in authorities’ pocket.

Yet one thing is hard to deny. The sleepwalking country might not have stopped in its tracks, but it has definitely woken up. The perception of benefits deriving from CCTV—justified or otherwise—is still strong. But at the same time, says Thomas, concerns about its misuse have increased, even as other forms of intrusion, like cybersurveillance, have taken center stage. Indeed, attention to the topic was so strong that in 2012 the British Parliament passed the Protection of Freedoms Act, instructing the government to develop a new code of practice for CCTV and its applications. The act also created a dedicated overseeing figure, the Surveillance Camera Commissioner.

It is easy to think that risks from CCTV are only connected to its misuse, which can theoretically be kept in check by a strong legal oversight. But can we really dispense with the possibility that simply being aware that we are being watched on camera fundamentally alters our behavior? What if, for example, I unconsciously start to alter my commute to work in order not to cross the cameras’ gaze?

The fact that consciousness has increased about the state of surveillance in Britain or elsewhere does not mean that risks have been put in check. Machine learning allows recognition software to mine ever-more information from footage. Additionally, the reshaping of cities by privates building-quasi-public spaces like malls—“gentrification” of run-down areas across London are a prime example—complicates the picture when it comes to legal duties and prerogatives. Does a mall owner need to alert the police when they see suspicious behavior on camera? Can they put cameras in more spaces than they would be allowed to in a public space? To whom is the first allegiance of camera operators, the law or their employer? (At least in the EU, the incoming General Data Protection Regulation promises to clearly define roles in data handling across all sectors—see The Technoskeptic article “America Needs the New EU Data Law You’ve Never Heard Of,” August 30, 2017.)

Taking a cue from Plato, an entity’s substance must have an appropriate form. If a society’s streets start resembling those of a Stasi state, it is hard for the democratic substance beneath to remain unaffected.