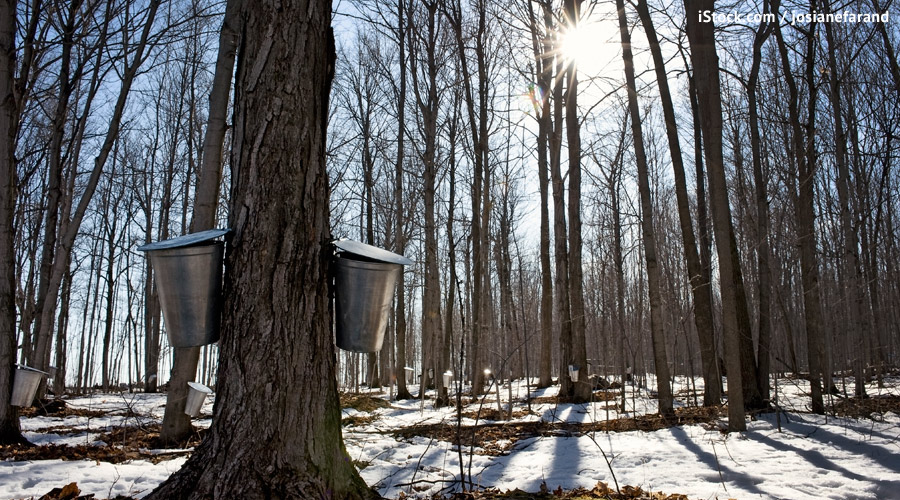 At the Proctor Maple Research Center at the University of Vermont, Dr. Timothy Perkins and his staff have been working to come up with more efficient ways of harvesting maple syrup. That’s because climate change is affecting maple production, slowly pushing areas with ideal weather conditions northward. Canada has taken over the lead in North American maple syrup production, even though 70 years ago, 80% of syrup came from the US.

Maple trees depend on an average temperature that is just high enough to allow for sugar production but still relatively cool. If it gets too hot outside, the trees get stressed, and they produce far less sugar. Not only is there not as much syrup available for harvest, but it’s also not as sweet as it would be in colder, most stable temperatures. That means it takes twice the amount of sap to produce pure syrup as it used to.

It’s easy to think of food only in terms of sustenance, especially when it comes to the effect climate change is having and will continue to have on our crops. Discussions tend to focus on the most dire food shortages and figuring out ways to simply feed the millions of people who will face increased food insecurity as a direct result of climate change.

But to many of us in the affluent West—proudly toting our reusable bags to the nearest Whole Foods to buy organic tempeh—the idea of a food shortage is somewhat abstract. Middle-class North Americans are unlikely to completely lose access to wheat, corn, or other staples that other societies rely on anytime soon. But that doesn’t mean that we are immune to dietary changes due to climate change-related spikes in food prices.

It’s hard for scientists to be certain as to how much climate change will affect agriculture in the years to come, but most point to decreased production in many of the crops we consume regularly. This decreased productivity will be caused not only by rising temperatures, but also by reduced fresh water availability, an increase in pests, forced migration, and a myriad of other complications. Coffee and chocolate, for instance, are two crops that could see dramatic price increases in the near future. And that’s more than an inconvenience—it’s a shift in culture. How would our workdays change if we could no longer afford a morning cup of coffee?

The loss of other foods will change culture in perhaps a less utilitarian, but more symbolic way. This year, Georgia suffered a loss of nearly 90% of its peach crop due to a warmer-than-usual winter. If weather trends like these persist, The Peach State could be losing more than a portion of its agricultural revenue—it could lose its identity. Dr. Tom Okie of Georgia’s Kennesaw State University, who wrote The Georgia Peach: Culture, Agriculture, and Environment in the American South, predicted that if the peach shortage in Georgia continued, “within fifty years you would start to see a shift away from the peach as a symbol for Georgia.”

The same can be said for the maple syrup crop in New England. It is a food borne of the region’s cold climate. The maple also plays a significant role in the region’s landscape, most evident by its red and golden leaves in the fall; even those colors are changing with rising temperatures. Now, for the first time, the climate is changing faster than culture can keep up. New Englanders don’t want to lose their syrup, and Tim Perkins and his team are working to make sure harvesters can keep production up even while the health of maples continues to decline.

Maple syrup is usually harvested by putting a hole in the side of a mature tree and pumping or letting the syrup ooze out. But Perkins and his colleague, Abby van den Berg, found a way to harvest sap from younger trees once mature trees become too stressed to remain productive. Instead of tapping from the side, they cut off the top of the tree completely and then pump the sap out from the center. Though this process would kill an older tree, younger maples can withstand the pruning and grow back the next year. 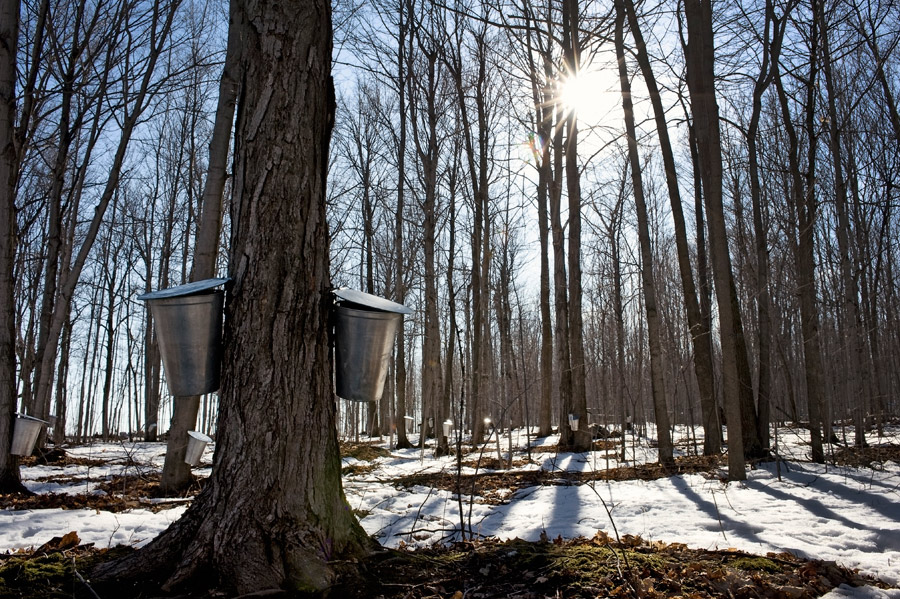 While this process and others like it may extend cheap maple syrup prices for a few years, it is derived from the same sort of mentality that has led to climate change in the first place. We have found ways to work around nature to develop fast transportation, advanced agriculture, modern medicine, and bustling cities, but these solutions have proved to be temporary fixes to complicated problems. It is becoming increasingly evident than many of the technologies we currently rely on—such as fossil fuels—will soon become too unsustainable to continue to utilize. In the meantime, this nearsighted and temporary “progress” fails to identify any underlying, holistic issues and sometimes even makes things worse. But because we have been able to successfully fiddle with minute aspects of nature, we have fooled ourselves into believing that science has given us the ability to understand all its complicated processes.

The Proctor Maple Research Center seeks a short-term economic solution to one very small aspect of climate change—decreased syrup production— without addressing climate change as a whole. That is not to say that research like this shouldn’t be conducted, but such small fixes promote the narrative that science will find a way to save us from the destruction it has already caused. These projects indicate a struggle not only to preserve our culinary cultures, but the hope that technology will provide refuge from the inevitable choice between climate disaster and drastic changes in our modern lifestyle. However, this sort of hope is a delusion, and it keeps us from taking actionable, measurable steps to reduce the effects of climate change while we still can.

Finding new ways to extract maple syrup from young trees ultimately won’t save New England’s food culture. The maple trees, under increasing stress from rising temperatures, will continue to under-produce sap. For a while, the syrup will keep coming while the trees slowly die, replacing vibrant reds and golds with brown. Other crops and sources of protein will begin suffer as they struggle to keep up with rapid climate changes. And soon, the whole world, not just New England, will be forced into cultural change significantly more drastic than the loss of an iconic food item. It will become more and more evident that problems like these have never been separate, distinct issues, easily fixed with simple solutions, but early signs of distress in a deeply-intertwined system—one that science has never been able to fully explain.

While farmers alone might not generally have the tools or power to tackle climate change as a whole, some sectors of the agricultural industry have grasped the importance of sustainability in their processes. Duke Lane III of Lane Orchards in Fort Valley, Georgia, says that the main changes his industry has seen over the past ten years involve using fewer spray materials like pesticides and herbicides and more “scouting and analysis,” which entails checking for the presence of pests to reduce the widespread use of pesticides on a crop. These methods are low-tech, and they may not have the any of the glamor of the exciting tools used by Perkins and his team, but they reduce the harmful effects of modern agriculture that have largely contributed to climate change. They are small steps toward more holistic and sustainable practices that may soon become essential.

It’s understandable why we want to hold onto our traditions surrounding food—it’s an integral aspect of any culture. But instead of focusing on the small, individual problems that we may only be able to find temporary, technological fixes for, we should instead focus on the the broad, wide-ranging, and infinitely complicated issue of climate change. The most logical solutions may not be waiting for us in the blind optimism of technological utopianism, but instead in a return to some of the most basic and sustainable practices of our ancestors. The results may not be immediate nor the methods particularly popular. Corporations and politicians especially might take a loss. But by making this significant ideological cultural change, we might just save one of the most vital aspects of not only survival, but culture: our food.