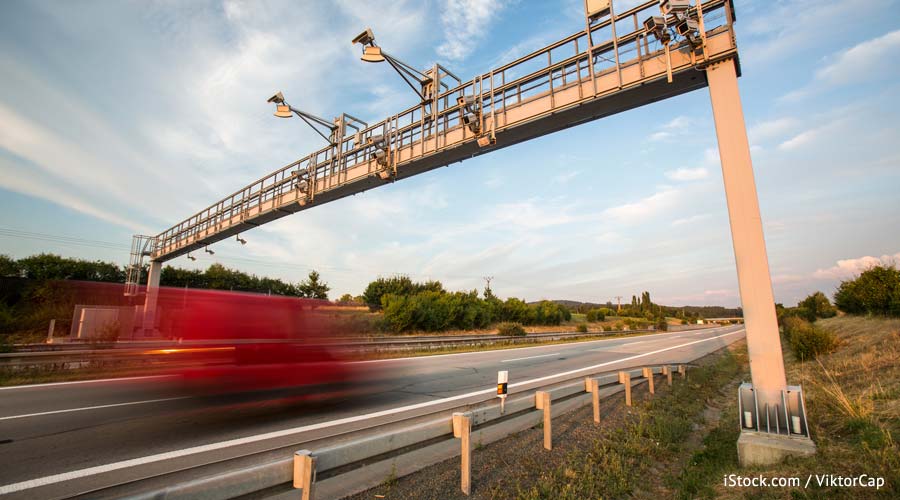 On October 28th, the Massachusetts Turnpike will switch on its automated toll-collection system, forever making toll booths, toll takers, and toll traffic obsolete in the state—surely better for travel, safety, and the environment. However, what it curiously does not eliminate is the actual tolls themselves. Instead, it favors a new system of $130 million gantries (raised metal structures with cameras and sensors), spends about 20% of the toll revenue on contractors to manage the collection, and most ominously, enshrines a new method of state surveillance that may have already been used illegally.

Massachusetts is only the latest in a growing list of states deploying all-electronic tolling (AET), sometimes called cashless tolling, pay-by-plate, or the like. If you live in California, Colorado, Florida, or Texas, you may already be quite familiar with it. AET has also been in limited use in Georgia, North Carolina, Maryland, Washington and a few other isolated locations. But we are at a moment where this technology is being newly adopted on many toll roads and bridges around the country. In addition to Massachusetts, just this year Illinois began their first cashless toll system on Route 390, Pennsylvania rolled out a pilot program on their turnpike, and New York’s Tappan Zee Bridge went cashless.

You may be wondering what the difference is between cashless tolls and the electronic tolling which has existed for over 25 years. If you have a transponder to automatically debit tolls from your account already, then the answer is: not much. And you have a lot of company. Transponder usage, often heavily promoted by states, has been growing rapidly. According to a 2016 survey of agencies by The International Bridge, Tunnel, and Turnpike Association (IBTTA), there has been an increase in the number of transponders from about 30.5 million to nearly 40 million between 2010 and 2015. About 77% of toll revenues from those agencies were from transponders. Drivers with transponders obviously benefit from rapid travel through toll booths without fumbling for change.

However this convenience comes at a significant cost to privacy: these transponders create a record, in some cases permanently, about your travel habits, including locations, speed, dates, and times. And this is where cashless tolling differs from previous electronic toll systems: it is not optional. Whereas drivers had the choice to pay tolls in cash and retain the confidentiality of their movements, they will now be automatically photographed every time they pass under a gantry. If you believe that it’s none of the state’s business where you happen to be traveling, your days of anonymity are numbered. Even if you don’t personally care about your own data, you might care that the state is disenfranchising others who are entitled to protect their privacy rights.

While each state has different rules and regulations, the process in Massachusetts—a state perhaps more concerned with civil liberties than most—can be instructive in understanding the issues in question. At a public hearing about the new AET system in Newton, Massachusetts on September 12, presentations by the Massachusetts Department of Transportation (MassDOT) explained in great detail the new electronic gantry operations and rationale. They listened attentively and answered questions. But when I raised issues of privacy, no satisfying answers were forthcoming. That is because, ultimately, MassDOT does not have them.

For those without transponders, the new automated system will take photographs of your license plate at every gantry, match it to your address, and mail you a bill. That bill will be more than double the tolls of someone with a transponder. For example, according to a chart at the hearing, driving from Boston to Newton (under 15 miles) will cost $4.15 without a transponder, versus $1.70 with one. It’s an incredible penalty for people who have quite literally done nothing.

What is MassDOT doing with all this data it is gathering? Highway Administrator Tom Timlin said they have no desire to hang onto the information any longer than is necessary to collect the tolls. Yet that’s not what’s happening. Other than the photos of cars with transponders (that’s right, all drivers on the Massachusetts Turnpike will be photographed whether they have a transponder or not), all of the data is being stored indefinitely. In fact, even though it has been 18 years since digital tolling debuted on the Pike, there is still not even a data retention policy.

There is, however, a law restricting how that data can be used. That is Massachusetts General Law, Part I, Title II, chapter 6C, section 13, which specifies that MassDOT must “maintain the confidentiality” of the data, which “shall be used for enforcement purposes only with respect to toll collection regulations.” That seems very clear, and yet the department’s own presentation unabashedly offered examples of how it has violated that directive.

First was a description of the “hot list,” the ability to put out a real-time alert—no time for warrants here—to stop particular drivers due to an Amber Alert or what was described as an “imminent threat to public safety.” Second, Timlin and chief of staff Jared Kadich offered statistics on highway usage by Newton drivers—information that they knew only because someone had matched plates to addresses via the system. In addition, this data has already been searched by law enforcement and via subpoenas for court cases like divorce proceedings. 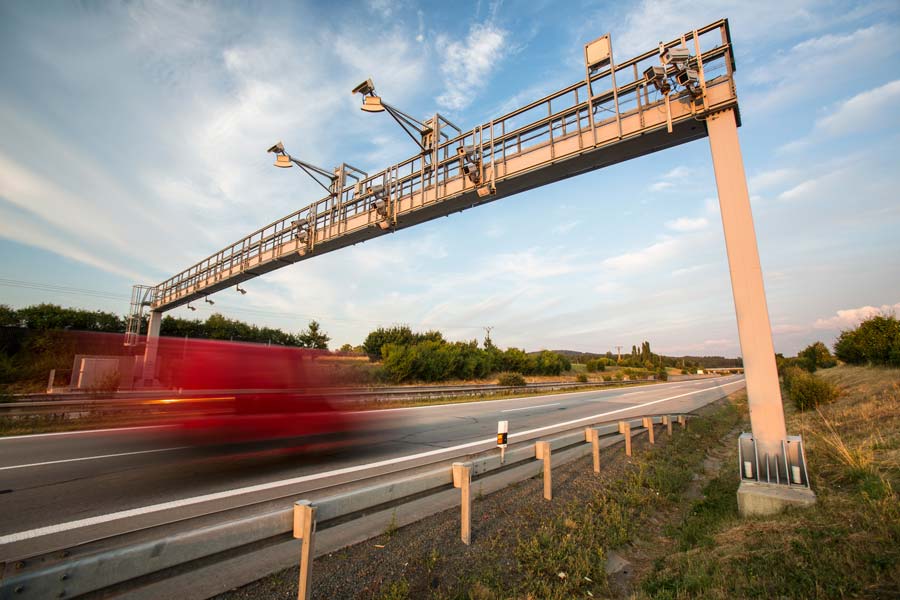 Alas, this is what happens when data is gathered. It becomes stored and put to unintended uses. Your every move becomes a record to potentially be pawed through in the search for evidence which may or may not exist. Freedom of movement must surely rank high on our list of coveted liberties in the US. But surveillance of people’s driving habits, and the questionable uses to which the data may be put, remove this liberty. What’s more, the growing state systems, including the new pay-by-plate regime, are becoming more reciprocal. Data is being shared across systems to better enforce tolling, effectively turning what has been a number of unrelated state databases into a putative national database. There is also good reason to believe the number of toll roads will increase. That’s because the gantry systems can be erected almost anywhere without disturbing drivers, and gas taxes have not kept up with the costs of road maintenance because it’s politically difficult to raise them. That suggests that more and more of our travel will be surveilled.

In 2010, the Washington, DC Court of Appeals issued a decision in US v. Maynard (also called US v. Jones) which threw out the evidence gathered by police after a GPS tracking device was placed on a car without a warrant. In the opinion, the court acknowledged that there was something different about systematic gathering of a person’s whereabouts, even though any single instance of surveillance might be legal. “A reasonable person does not expect anyone to monitor and retain a record of every time he drives his car, including his origin, route, destination, and each place he stops and how long he stays there; rather, he expects each of those movements to remain disconnected and anonymous.”

The proponents of AET have one very powerful argument on their side: no more toll booths. Who would disagree with that? Drivers continue at highway speeds while tolls are billed automatically. Eliminating toll booths is indeed a great improvement. They were always a terrible idea—dangerous for drivers with higher accident rates, bad for the environment by creating backups and start-and-stop traffic, annoying from a travel perspective, and an incredibly inefficient way to collect money.

But what’s frustrating about this solution is that it’s completely unnecessary. It creates a brand new regime of state surveillance when you could easily accomplish the same thing without surveillance. How? The exact same way every single other road is maintained, via taxes. Sure, people don’t want to pay more taxes, but they’d be paying less in tolls. It doesn’t make sense for drivers to pay tolls for the use of a few particular roads or bridges when all the thousands of others are free. Don’t like broad-based taxes? How about a mileage charge based on odometer readings when you get your car inspected? There are plenty of ways to raise revenue that don’t require tracking people’s movements.

Furthermore, these toll systems are actually costing all of us more money than having no tolls. That’s because the administration of the tolls, even without toll takers, is quite expensive. There are the construction and maintenance costs of the gantries, the processing costs of the data-gathering, storage, debiting, mailing, and legal mechanisms around the system, and the countless hours spent by highway administrators designing systems, setting rates, conducting hearings, and negotiating contracts. All of that money could have been spent on improving our roads. In the case of Massachusetts, it costs eight cents if you have a transponder and 29 cents if you don’t to process your toll from every single gantry you pass under. That works out to about 20% of the toll collected. That money goes to a contractor instead of the maintenance of your highways.

The bigger problem is that once surveillance is in place, it is hard to remove. People will find new ways to use the data that is collected. Data is managed by third parties who may not have the same incentive as the state to safeguard it. Administrations and rules change over time; the data does not. There will likely be public pressure to use it pre-emptively to counter imagined threats. Once that happens, it is not difficult to imagine similar surveillance schemes placed on other roadways, irrespective of toll collection.

This type of mass surveillance is wrong, probably unconstitutional, and in Massachusetts, it’s already seemingly been used contrary to the law. Drivers should be allowed the freedom of movement without wondering at every turn who is watching them and what is being recorded. Our transportation agencies should revise their systems to ensure residents have the privacy they are legally and morally entitled to.