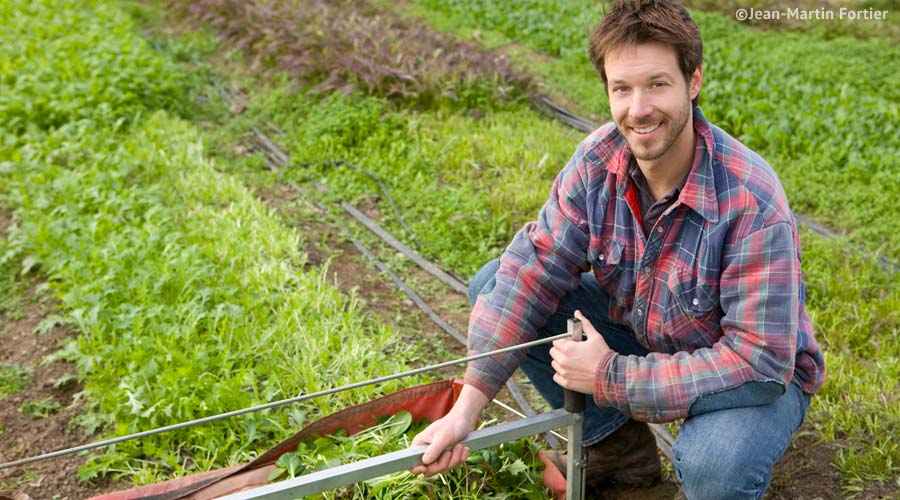 Over the past century, generations of young people have turned their backs on city life to embrace small-scale farming and back-to-the-land ideals. The exact circumstances for each generation’s return have varied: the Great Depression in the 1930s, the Vietnam War in the ’60s and ’70s, and, more recently, the loss of ecosystems and biodiversity to industrial agriculture and climate change.

Each generation has had one common desire: to live a more honest, ethical life of self-sufficiency and oneness with nature.

But three back-to-the-land farmers managed to succeed in a fickle vocation that seems to demand equal parts skill, determination, and luck. What choices did they make, and are their experiences instructive for struggling young farmers today?

Jean-Martin Fortier: Standing on the shoulders of giants
In the winter of 2001, two freshly minted graduates of McGill University’s School of Environment, Jean-Martin Fortier and Maude-Hélène Desroches (then 22 and 23, respectively), embarked on an eco-exploration of the Americas. They picked coffee beans on a fair trade farm in Mexico and built yurts at an off-grid community in New Mexico. But it wasn’t until they started working at a small organic farm near Santa Fe, New Mexico, that they decided they wanted to commit their lives to small-scale organic agriculture.

Several years later, as they were expecting their first child, Fortier and Desroches were living in a tipi and leasing one-third of an acre, where they eventually launched a 30-member CSA and saved money to buy the 2-acre plot that became their farm, Les Jardins de la Grelinette, in Saint-Armand, Quebec.

Fortier wrote to Eliot Coleman, then in his 60s, who was a pioneer of organic farming and author of The New Organic Grower: A Master’s Manual of Tools and Techniques for the Home and Market Gardener in 1989.

Coleman’s was the first farming manual Fortier and Desroches picked up, and Fortier wanted to thank the older farmer for his teachings and ask permission to visit his Four Season Farm in Harborside, Maine.

“I probably read the book 40 times, always trying to figure it out, read between the lines,” Fortier recalled, visibly moved by the recollection. “I’m sorry. I get emotional about it, but it was the only book that described what we were trying to do.”

Building on Coleman’s farming techniques, Fortier published his own how-to guide in 2012 (and its English language edition, The Market Gardener: A Successful Grower’s Handbook for Small-Scale Organic Farming , in 2014). It has been a huge success: More than 100,000 copies have been sold worldwide, and it continues to be published in other languages, including German, Italian, and Dutch. In 2015, it won the American Horticultural Society book award, a coveted prize.

As Mother Earth News said, “If you’re a vegetable grower and you haven’t yet heard of small-scale agriculture advocate and author Jean-Martin Fortier, you need to look him up.”

To such farmers, Fortier’s message in Market Gardener is enticing: “A well-established, smoothly running market garden with good sales outlets can bring in $60,000 to $100,000 per acre annually in diverse vegetable crops. That’s with a profit margin of over 40 percent.” (For context, the average CSA farmer brings in less than $40,000 per acre of vegetables.)

Like his mentor Coleman, Fortier assured readers that they too could run a profitable farm and have summers off to travel and learn—in short, to live an ethical, good life.

“Are you just making money, or making a difference?” he asked rhetorically. “We’re fortunate because we’re doing both.”

Helen and Scott Nearing: Mentoring the mentor
Just as Fortier looked to Coleman as a role model, Coleman looked to an earlier generation of teachers to show him the way. Thirty-four years earlier, he had made the pilgrimage to see the renegade farmers whose 1954 book inspired him.

In Living the Good Life: How to Live Sanely and Simply in a Troubled World, Helen and Scott Nearing told the story of their two-decade adventure of subsistence farming. It became the hippie handbook of the day. Coleman fell in love with the romance of Living the Good Life, a sort of Walden for a generation disgusted by the Vietnam War and the militarism it stood for.

“They made farming sound adventurous,” he said. 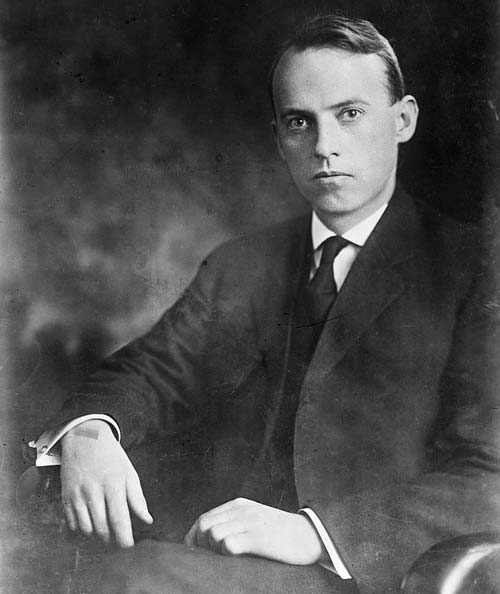 Scott Nearing was a pacifist, vegetarian, and socialist. The brilliant economist had been dismissed from the faculty of the University of Pennsylvania in 1915 for his outspoken stance against child labor and vested corporate interests. Homesteading for him was a way to drop out of the “price-profit” economy and the “blood culture” of meat-eating and create a completely self-sufficient and nonviolent homestead.

Perhaps Nearing saw something of himself in Coleman, who was a handsome, confident Williams College graduate with piercing blue eyes and a manic energy level that Coleman himself says “today would probably have me on an intravenous drip of Ritalin.”

His visits to ’60s-era New Hampshire health food stores introduced him to Living the Good Life. The book inspired him and his then-wife, Sue, a dreamy descendent of Mayflower folk, to pilgrimage to Harborside, Maine, in 1968, where the Nearings had relocated 16 years earlier.

So charmed were Scott and Helen—then 85 and 68, respectively—by this young couple, that later that same year they sold them 60 acres of fallow land. Scott’s socialist beliefs and his horror of the “trap of riches” made the thought of profiting from a sale abhorrent.

The restless Coleman cleared his rock-filled land by hand and threw himself into farming, making off-hours trips to the library to study the agricultural practices of other ages and cultures.

In 1973, the first year Coleman turned a profit on his 1 1/3 acres, he set his sights on touring organic farms in Europe to bring back the secrets of “biological agriculture,” as organics were known there. Funded by a grant from the Nearings, he made his first visit in 1974 to Europe, where he discovered that small-scale organic farming and machinery were leagues ahead of the U.S.

Importing European market gardening techniques
In France, Coleman met Louis Savier, who farmed a little more than 1 hectare (about 2.5 acres) just south of Paris. Coleman describes the French farmer as “a surviving example of the classic French system of intensive market gardening, with lots of compost, cold frames, and greenhouses,” and he brought those techniques back to Maine, improving on them.

Soon, following the oil shock of the 1970s and the disillusionment over Watergate, Coleman began to attract his own stream of apprentices. Driven back to the land, they joined him in discussions about agriculture and politics and farmed in the nude, high on the beauty of Maine and the idealism of their endeavors. Coleman went on to distill his practical knowledge in his 1989 book, The New Organic Grower, and three more books.

When idealism and know-how aren’t enough
Despite success stories like Coleman’s and Fortier’s, many of today’s young farmers understand how unforgiving it is to make a living through farming. They approach the romanticism of it with their eyebrows cocked, just as they did in Coleman’s time.

Lindsey Lusher Shute, 38, is the executive director of the National Young Farmers Coalition. After six years of highly successful farming on 25 rented acres in the Hudson Valley, Shute and her husband, Ben Shute, realized they had no long-term security, and that every farm in the area they might want to buy was priced over a million dollars. Though she calls Coleman and Fortier “inspiring” to NYFC members and “the spark that gets them going,” she says that “structural problems in farming are not allowing a new generation of farms to thrive,” citing the high cost of land, student debt, and out-of-reach health insurance premiums.

Though the young farmers within her network wield social media to their advantage and benefit from a dedicated customer base that is invested in sourcing its food, that’s still not enough, says Shute.

“Many of our farmers are essentially retiring in their early 30s,” she explained. They think about starting a family and saving for retirement and realize that farm income is grossly inadequate for meeting their life goals.

While the NYFC doesn’t have any hard numbers on farmer retention rate, Shute said, the organization is now analyzing data from a survey of 4,700 young farmers from across the country. Results will be more detailed than with previous surveys, including data on the reasons participants chose to leave farming.

As older farmers retire and the country faces a serious shortage of farmers, the NYFC is lobbying for a federal student loan forgiveness program and working to make farmland more affordable through improved federal and state laws governing conservation easements. (Shute and her husband were able to buy 70 acres in 2012 with the help of a local land trust.)

Helpful traits and techniques
The obstacles the NYFC is fighting to eradicate are real. Yet it is also instructive to examine what helped the Nearings, Coleman, and Fortier and Desroches succeed in eras with different challenges; Coleman, for example, wishes he had even a fraction of the instruction and tools that are now available to small-scale farmers.

In the Nearings’ case, part of their success had to do with their uncommonly ascetic natures and their zealous (perhaps even sanctimonious) embrace of work. Using only hand tools, they erected nine stone buildings, all while keeping up their farming, writing, and lecturing and research trips. Nearing wrote, “Human beings can be divided into two groups: those who yearn for a comfortable existence and those who revel in a hard life of decision and struggle.”

The Nearings were also meticulously organized strategic planners, drafting a 10-year plan “as though we were handling a large-scale economic project.” They even created a color-coded system for storing tools.

Coleman and Fortier too place a high value on organization, planning, close observation, and record keeping. In The New Organic Gardener, Coleman details his process of using a 3-by-5-inch index card for each crop type, shuffling them to reflect ideal crop rotation sequence. In The Market Gardener, Fortier supplies a map suggesting the most efficient and ergonomic layout of a market garden, and thanks his businessman father for teaching him at a young age “the importance of being well-organized.”

That market farming has a high failure rate, added Coleman, is no different from any type of small-business startup. “Ninety-five percent of small business startups fail in five years,” he pointed out.

Like any endeavor fraught with uncertainty, small-scale organic farming requires fearlessness and a certain leap of faith to ensure success. It requires the business skills of a corporate CEO, as Coleman likes to say, and the spiritual forbearance of a monk.

In the face of such steep odds, the existence of organizations like NYFC and the teachings of the Nearings, Coleman, and Fortier are crucial—they propagate the urge to return to the land, to quest for an ethical, “good” life.

Nancy Matsumoto wrote this article for YES! Magazine. Nancy is a freelance writer and editor specializing in the areas of sustainable agriculture, food, sake and Japanese culture in the Americas. Her articles have appeared in Civil Eats, The Wall Street Journal, Saveur, Food and Wine, and NPR’s The Salt, among other publications.