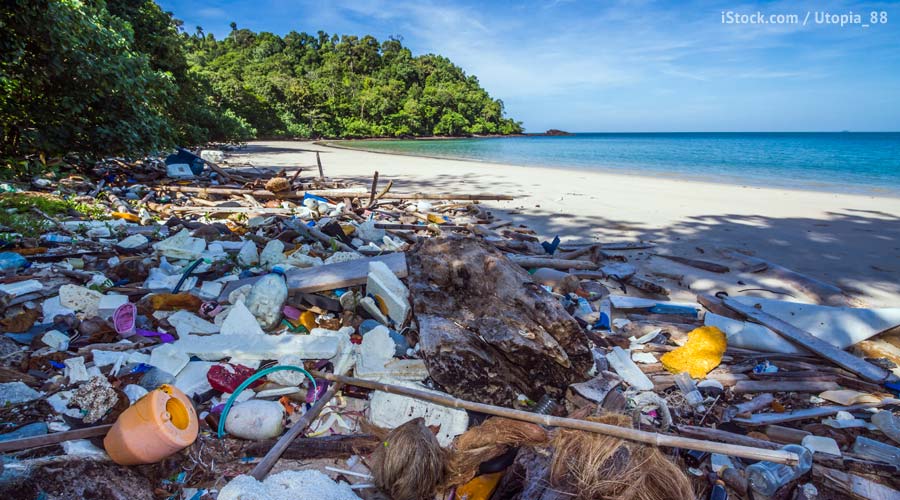 If we could curate the contents of human achievement for future Earth-dwellers after we’re gone, we might include the works of our philosophers, scientists, authors, and political theorists. Most of us would like to think that there will be a way to leave a record of humanity’s achievements, our stories, our accomplishments. But long after our ideas, our struggles, and our successes are forgotten, our legacy of dependence, crippling convenience, and fatal shortsightedness will be fossilized in plastic.

The story of humanity’s most permanent and persistent legacy begins just over a hundred years ago, when plastic, a cheap alternative to glass and other materials, was first synthesized by Leo Hendrik Baekeland in 1907. The versatility of plastic and the rise of industrialization meant that plastic quickly became ubiquitous in modern life. Then, as jobs started to become more demanding and products became cheaper and more accessible, plastic became an essential ingredient for a new, faster-paced, more convenience-oriented society.

This emphasis on convenience has lent itself to a persistent culture of disposability. Use it once; then it’s gone. It’s fine because it’s cheap. But plastic’s ubiquity has blinded us from its inability to decompose naturally and its inherent disharmony with our environment. If it weren’t tragic, the irony of using a material that is not biodegradable for our disposable products would be comical.

Of course, plastic is incredibly useful and responsible for life-saving technologies, especially in medicine; part of what attracted us to it is its sterility and impermeability, which symbolically distanced us from the natural world. As we’ve become disconnected from our natural environment, we’ve started to fear it, convinced that the thin layer of cling-wrap encasing our produce somehow makes it cleaner, safer, more impermeable to contamination than the dirt in which it was grown. Ironically, this packaging and other sources of plastic now function as the contaminants themselves.

By losing our connection to our environment, and therefore our food, we’ve cultivated a fantasy of our own plastic-like impermeability, imagining we are simply on the Earth rather than of it—fantasizing that by virtue of our Tupperware and pre-packaged foods, we ourselves are encased in hard plastic shells, impermeable to the pollution we inflict on the Earth. 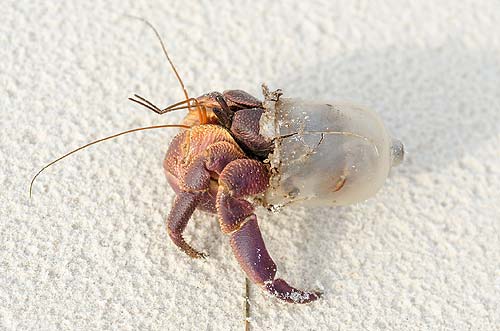 But this idea is a fantasy borne of technological utopianism and a collective indifference to pollution. What we put into our environment, we put into ourselves. This became obvious in 2009, when researchers commissioned by the Environmental Working Group, a non-profit research and advocacy organization, realized that fetuses were already contaminated with toxic plasticizing compounds in utero, including the now-infamous Bisphenol A (BPA). We have polluted our most personal and direct legacies, our children. And in this way, the human weaknesses that have led to our overuse and abuse of plastic manifest themselves physically, mentally, and metaphorically in new life.

The Centers for Disease Control and Prevention estimates that 93% of people now have plastic in their bodies, and it ends up there in a few different ways. The eight million tons of plastic that finds its way to the ocean breaks down relatively quickly, leaching toxins into the water. Because plastic is largely oil-based, it attracts other types of water-insoluble pollution, such as a variety of chemicals and heavy metals. Tiny pieces of plastic ingested by marine organisms are therefore highly toxic and result in contamination all the way up the food chain, eventually reaching humans. 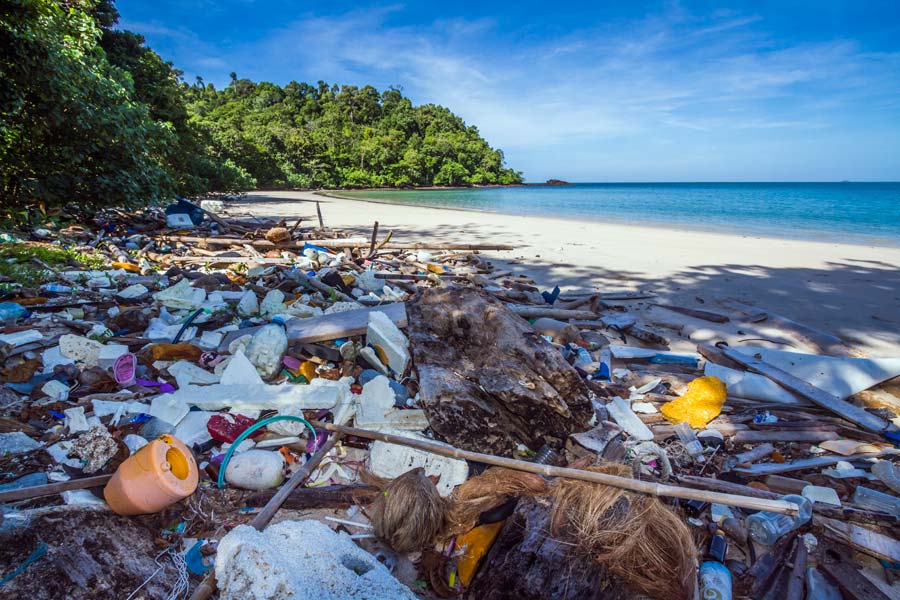 The same process can happen on land, but it usually happens more slowly. If a decomposing animal that has eaten plastic is not consumed by another animal (thereby contaminating the predator animal), the plastic will slowly break down into the soil where it begins to leach harmful chemicals, polluting the surrounding soil and nearby sources of groundwater. Produce grown in contaminated soil itself becomes contaminated. Plastic-derived chemicals can drastically reduce the fertility of soil, resulting in poorer-quality produce in addition to contamination.

This has a direct effect on the Earth’s food supply, especially for those who rely primarily on locally sourced food and live in highly polluted areas. Animals that consume enough plastic soon become sick and die, which is most evident in fish populations. In 2015, researchers from the Zoological Society of London and the World Wildlife Fund found that the fish populations humans most depend on declined by 49% from 1970 to 2010. Many societies rely on these species for a majority of their protein intake, so a worldwide shortage of fish could result in disastrous malnutrition for the world’s poorest nations, like Bangladesh, Ghana, and Senegal.

Even in places where malnutrition is less of a concern, this is still a major health issue. Small doses of phthalates or other plastic additives can disrupt healthy endocrine function in babies and young children, since many of these chemicals mimic estrogen in the body. Altered hormonal levels can have drastic consequences on children’s development throughout childhood and as they age. Some studies, including one performed by researchers at Rutgers New Jersey Medical School and Rowan University School of Osteopathic Medicine, have even suggested a link between plastic exposure and autism and other cognitive issues.

As we continue to increase our plastic consumption, levels of plastic contamination will rise. In just one year, from 2012 to 2013, plastic production increased by four percent, a massive leap. We are effectively slowly poisoning ourselves largely for the sake of convenience—convenience that has increasingly led to a child-like dependence on corporations to provide us with easier and easier ways to go about the basic tasks of survival. And since these items are often used and discarded in a matter of minutes, we hardly think about where the waste ends up: landfills, the Great Pacific Garbage Patch (an area in the Pacific Ocean where plastic trash collects in high densities), the blood running through a newborn’s veins. In fact, the recently-explored Henderson Island, a remote island in the Pacific Ocean, has been found to have the highest density of plastic trash in the world, providing a visual reference of plastic’s long-term consequences.

The proof of our contamination goes beyond physical detection and damage. We are now aware what plastic does to environment, to us, to our children, and yet we still continue to use plastic bags, water bottles, and other disposable plastic products with abandon. In doing so, we are unintentionally teaching the next generation that short-term, fleeting convenience is more important than their health or their futures, a metaphorical poisoning of the mind to adapt to the poisoning of the body.

Our ancestors left legacies of stone, iron, and bronze. But our generation’s legacy of plastic will outlive any other. Our monuments are landfills and the floating plastic soup in our oceans. But unlike other generations, we carry our toxic legacy even further: plastic is literally in our blood, a part of us.