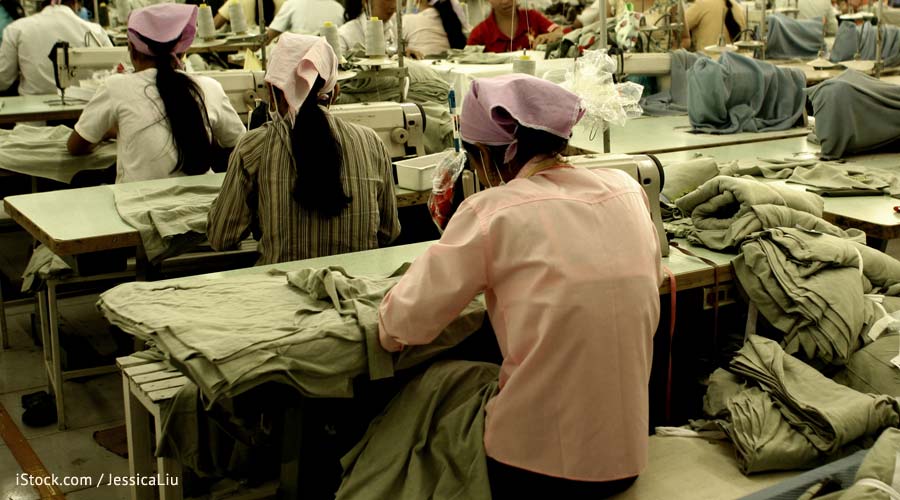 Now that robots can sew, what does the future hold? “If you took the broad picture and looked at the factory production floor, the only thing that would be different is very few people, if any,” explains Steve Dickerson, founder of SoftWear Automation. Thanks to venture capital and some brilliant engineers, robotic sewing has not only arrived, it’s poised to revolutionize an entire industry. That massive global layoffs await is not only undisputed, it’s portrayed as a boon to manufacturers and consumers alike, for whom cheaper jeans is the consummate goal. Eliminating that pesky cost of human wages will undoubtedly reap benefits to the “haves.” As for the “have-nots”? They’re collateral damage in the inexorable march toward progress.

The rising cost of labor in the developing world, where most sweatshops now reside, has led the textile industry to move from country to country in a relentless search of the cheapest, most exploitable workforce. This is despite the sewn-products industry being worth $618 billion this year, according to Ibisworld’s Global Apparel Manufacturing report. The post-NAFTA 90’s saw a migration of garment factories from the US to Mexico, then Central America, and on to China, Cambodia, Vietnam, and finally Bangladesh, where most workers are paid the equivalent of $13–15 per month, as of a 2010 International Trade Union Confederation survey. A recent article in Textile World Asia notes that “a global shortage of skilled seamstresses, and a change in consumer behavior pushed by fast fashion brands and social media platforms” have further set the stage for automation. A living wage is so outmoded; we need our fashion cheap, disposable, and as ever-changing as an H&M window display.

Proponents of robotic sewing will point out that the deplorable conditions many workers face in the maquiladoras of the impoverished world will be eliminated. But what are the alternatives for these mostly female workers who are often supporting entire families? The eerie silence on this topic is replaced with talk of the highly-skilled jobs in the tech industry that will allow for the spread of robotics to a whole host of other fields. As Dickerson himself notes, “There will still be jobs…. You will need some people to work in the factory, mostly to take care of the robots, fewer jobs, requiring a fair bit of education.” So we’ll be seeing a vast reduction in jobs, and those jobs that will exist will go to highly-skilled robotics engineers. An unprecedented surge in economic inequality awaits.

Frank Henderson, a CEO and expert in the implementation of garment industry robotics, pointed out to conference attendees a $25,000 robot and exclaimed, “It doesn’t get sick, doesn’t take vacation!” reports The Business of Fashion. Of course, real-live garment workers aren’t getting sick days or vacation either, but in a field known for its ruthless pursuit of low overhead by any means, even the lowest wage workforce must be dispensed with. When ignoring building codes, violating health and safety regulations, and locking in workers in the name of efficiency still does not bring the price point low enough, the next step is to do away with the workforce entirely. 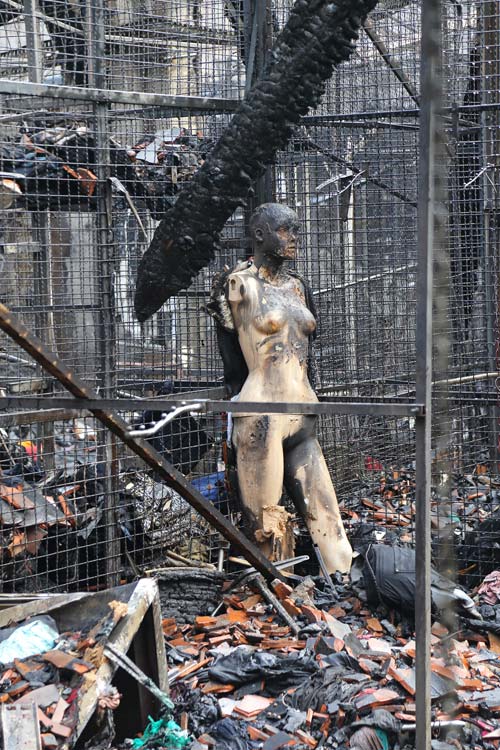 The result of an all-too-common garment factory fire. iStock.com / Baloncici

There is no question that painstaking work and horrific conditions face workers sewing everything from t-shirts and underwear to high-end cocktail dresses. Those throwaway clothes are made by throwaway people; lives are spent toiling for our bargains. These are jobs involving a tremendous physical burden, which is only worsened by the atrocious greed of an industry with no regard for its employees. This is exemplified by the April 24, 2013 collapse of an illegally built garment factory in Dhaka, Bangladesh. The tragedy claimed 1130 lives, with 2500 injured, many maimed for life. In response, over 3,000 clothing factories were inspected for violations; only eight of them have worked to correct their violations adequately enough to pass final inspections, as per a New York University study that came out just last year.

The crux of the global question facing our business leaders is this: as the industry readies itself for a windfall in profits thanks to their new non-human labor pool, do they owe anything to society? Will creating a few highly coveted robot-caretaker jobs absolve them of the deluge of suffering that comes with widespread unemployment among those least prepared for such an emergency? Should they make any attempt to harness their newfound earnings to tackle the hunger and homelessness that will directly result from the closing of their already-dirt-cheap factories?

Perhaps one solution would be akin to that of the carbon credit. Unlike global warming, which has its share of “earth is flat” naysayers, presumably the anguish of a family with no income is something the world at large can rally around. Those companies seeking to eliminate their workforces purely in the name of profit could be asked to pay a robot credit. This would involve a fee, quite affordable given the labor savings, which would go toward a combination of social services, education, and training for these casualties of the tech revolution.

A second source of funding must come from consumers themselves, whose expectations for impossibly cheap goods contribute to the epidemic facing the textile industry as whole. No longer can we accept that the price of “fast fashion” is poverty-level wages. Considering that fashion is, by its very nature, an inherently image-driven field, one might think that the PR consequences of an unwavering look behind our name brands for less would galvanize interest. A sustainable clothing movement, in which transparency and ethics are more than a passing style, will only occur if we, as consumers, demand it.

Automation currently threatens the most vulnerable and poorest among us. The plight of the garment worker has remained bleak despite the passage of time, their needs safely off the radar of those powerful enough to effect change. There is one hope, however, for the people who’ve been ro-booted by the sewbots: that as robot-creep chips away at white collar jobs, those higher-up on the economic scale will finally pay attention.

Just last month, a CNBC headline announced the chilling words “The robots set to disrupt white collar work.” In the piece, Neil Kinson, of the robotics firm Redwood Software, explained that white-collar job efficiency improvements have not matched those of blue-collar jobs. One would have expected the technological breakthroughs in the manufacturing sphere to mirror robotization in higher level jobs, particularly those that involve a degree of repetition. “The reality is quite different, and we at Redwood see robotics as the key to liberate those workers from the mundane and repetitive work and to finally close that productivity gap, and deliver against what technology promised.”

As white-collar workers prepare to be liberated from their paychecks, they just might develop a bit more empathy for their garment worker brethren. As for empathy, it’s the one thing that robots can’t manufacture.