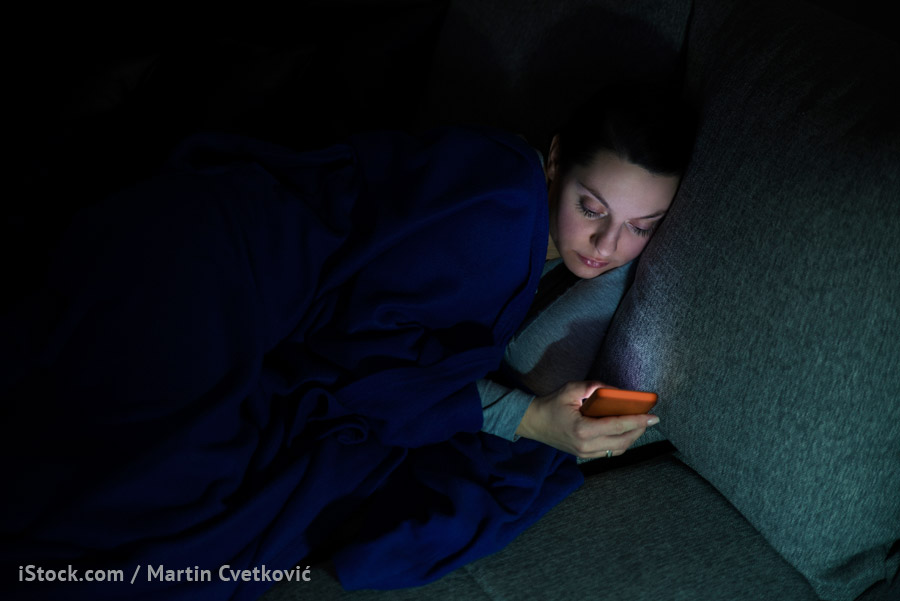 Blue light emitted by electronic screens is a significant contributor to sleep deprivation, an increasingly common problem with serious consequences. Here’s some why, how, and what to do.

Imagine, if you will, a moose. He enjoys a typical moosey sort of life, full of rutting, chewing, standing around, and posing for the occasional tourist pic. He understands that a bulbous red nose and/or drunk Santa straddling his back will likely be photoshopped in at some point, but that’s cool because he’s pretty zen about the strange ways of humanity. He lives near Örnsköldsvik in Sweden, so let’s call him Møøse.

Like the large majority of living things and possibly even drunk Santa, our Møøse has many biological processes that follow a circadian rhythm. That is, they cycle from one state to another and back again in rough lockstep with the day/night cycle. This synchronization to a predictable and influential cycle in the environment allows an organism to optimize said processes.

Average body temperature, for example, moves from a generally stable peak during the day to a generally stable trough that lasts through the night. This lets us conserve energy during a recurrent period of low activity and expend it during one of high activity. The same can be said of heart rate, blood pressure, the production of many hormones, and of course the sleeping-waking cycle.

Although the transition from day to night and back again is cyclical, its time of occurence varies, both by season and latitude. In late November, for instance, the sun sets on Møøse as he pines for the fjords at around 2:30, while a claims adjustor in Duluth can adjust away in full daylight until 4:30. Because of this variability, circadian rhythms need to be entrainable—they need to be able to adjust themselves to environmental conditions that are periodic, but whose periodicity can change too.

Recovering from jet-lag is a classic example of the entrainability of circadian rhythms. Rapid travel across time zones takes us temporarily out of sync with the day/night cycle, leaving us in a foggy stupor. But, over time, our rhythms eventually adapt to the shift in conditions. It may take a few days after that red-eye to Duluth, but at some point Møøse will be able to follow the adjustor’s explanation as to why his bear-mangled tibia didn’t qualify for workers comp (dual citizenship, long story).

The primary regulator of the circadian cycle in mammals is a pair of distinct cell-groups in the hypothalamus called the superchiasmatic nuclei (SCN). The SCN receives information on lighting conditions from a direct link to purpose-built cells in the retina. Based on these conditions, it then directs the pineal gland to increase or decrease production of the sleep-regulating hormone melatonin. Production is stepped up when it’s dark, inhibited when it’s bright.

So, when the sun is out, Møøse has low levels of melatonin in his body and thus feels fresh and alert, free to gambol about the Swedish woodlands. When the sun is down, he has high melatonin levels and longs for the warm embrace of moosey sleep. Everything is running as it should in the wilds around Örnsköldsvik.

Of Moose and Men
Unlike most moose, however, the modern human sometimes must (but mostly just wants to) do things at night other than sleep. And so our dark hours are awash in the artificial illumination of overhead lighting, lamps, computer screens, and smartphone displays. Problem is, our false light is also giving our circadian regulator the false impression that it’s still daytime. Melatonin production is thus scaled back when it should be ramped up, and we basically don’t go to sleep when we really should.

Doesn’t take much to push the needle, either. As little as eight lux of artificial brightness can interfere with circadian regulation, a level exceeded by most table lamps. But a lamp probably isn’t why you’re staring at listicles until two in the morning; the biggest culprit is the screen in front of you and it’s damned blue light.

As demonstrated by any good hacker movie about hackers, like Hackers, a hacker hunched in front of a computer in the dark looks something like a Romulan Smurf. Their skin glows a sombre blue, contrasting sharply with their black jacket and efficient bowl cut. Unlike every other depiction of technology in such a film, however, this one is accurate. Screens of electronic devices do indeed emit light heavily concentrated in the short-wavelength end of the visible spectrum—the blue end.

The purpose-built retinal cells pumping info to our SCN can discriminate between different wavelengths of light; furthermore, the SCN system has a peak sensitivity to blue. In other words, blue light causes the suppression of melatonin production more than other wavelength region.

So, staring at a screen effectively hits the snooze button on our go-to-sleep notification, and we thus continue to stare at the screen, which hits the… you get the idea.

Beating the Blues
The negative physiological effects of perpetual insufficient sleep are many and varied. It is linked to an increased risk for depression, obesity, diabetes, heart disease, and several types of cancer. It impacts the immune system, short-term memory, creativity and learning performance. It is symptomatic of several neurodegenerative diseases, including Alzheimer’s. Although the direct causal relation in many of these cases still isn’t fully understood, the relationships themselves have been borne out in study after study.

In short, if you’re habitually not getting enough sleep, it can be remarkably bad for your health, so maybe let’s do something about it. If you have clinical insomnia, seek out help from your doctor. If you are a shift worker, I can only sympathize with your plight. But if you’re a die-hard night owl, I actually have some useful options for reducing your blue light intake to RNA (recommended nightly allowance) levels and recapturing some lost territory in the kingdom of sleep.

Option 1: Stop using electronic screens before bed—anywhere from 90 minute to three hours before, depending on where you’re getting your professional advice.

Option 2: On Windows, Mac, and iOS devices, Install f.lux (justgetflux.com). On Android devices, install Twilight from Google Play. Do so immediately. These free apps automatically adjust your device’s light output according to expected ambient lighting conditions for the time of day. This significantly reduces the amount of blue light they emit in the evening and at night. The downside is that your screen will start getting progressively more orange-y as darkness falls.

Option 3: Wear glasses that block blue light. A reputable pair will probably set you back about $50-80. Sporting the unconventional I-wear-my-sunglasses-at-night look is an upside, true.

Option 4: Turn down the brightness level when it gets dark out. This will reduce the intensity of all emitted wavelengths, including those from the blue region. F.lux, Twilight, and similar apps are better at blue-light reduction, however, and they don’t make you squint.

Option 5: Roam free in the scenic countryside surrounding Örnsköldsvik. But if you spot a disgruntled-looking moose with a pronounced limp, steer clear.