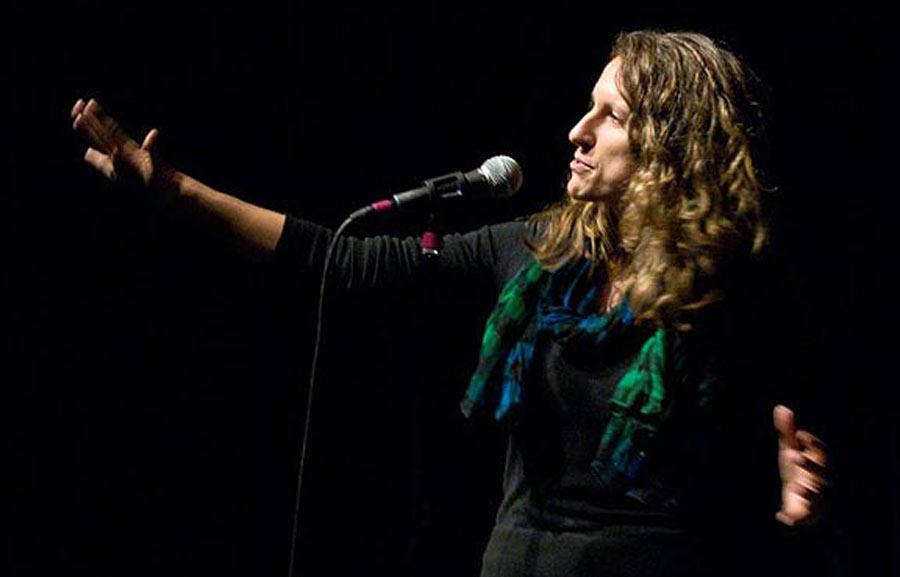 I’m a live storyteller. One of those people popping up all over America right now who stands on a stage telling true stories from their lives. In the four years I’ve been performing, I’ve told the juiciest bits from my life—first kisses, sibling battles, car break-downs, embarrassing moments, broken bones. The standard fare of a life imperfectly lived.

Lately, though, I’ve been approaching the point every storyteller dreads: the day the well runs dry. I’ve told my best ones. If I’m to get new material, something, frankly, must go wrong. Barring a stint with the Foreign Legion, I must keep a sharp lookout for life’s little conflicts.

Fortunately, this summer, a friend of a friend asked me to drive her car from Boston to San Francisco for her. A solo cross-country road trip: an odyssey! The possibilities for adventure were as vast as the continent I would traverse.

I waffled over whether to get a better map-enabled phone for the trip, but too much the cheapskate, decided to make do. As it happened, I never got lost once. I saw America with a healthy mix of mishaps and good fortune. Among the mishaps: the car’s splashguard flapping loose at 75 miles an hour, the temporary loss of my phone and wallet at a Navajo flea market, a fender bender in a friend’s station wagon in New Mexico, a flash thunderstorm at the Grand Canyon, the day I nearly ran out of gas in the desert. My heart raced from moments of fear and exhilaration. I made it to San Francisco regretful only that I’d run out of highway. 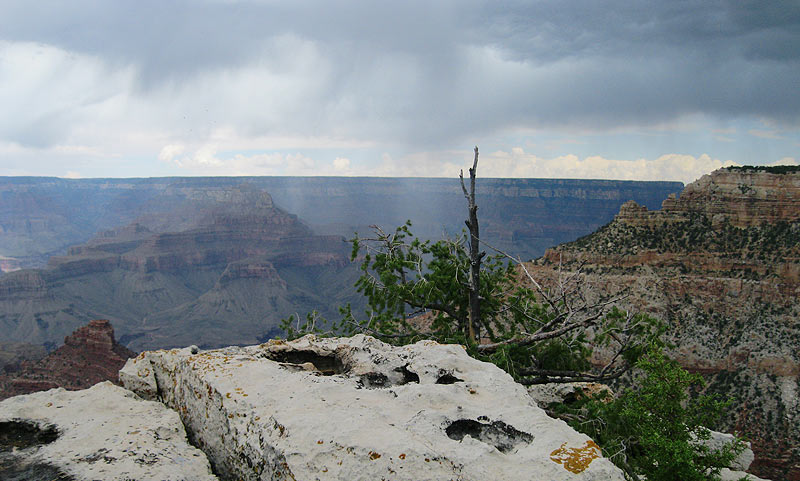 When I returned to Boston, I ate dinner with a few friends, one of whom had just completed an internship at Ford. She said the auto industry was treating self-driving cars as a certainty. Our other friend remarked, “In 20 years, we’ll look back and think how crazy it was that people ever operated these dangerous four-ton machines.”

Were they dangerous? I thought back to my long hours of driving. Yes, I supposed I could have died many times over at highway speeds. At the time, the experience registered as absolute freedom—my grip on the wheel, the purr of the pedal beneath my foot, the wind whipping me alert. If this qualified as danger, then surely my mishaps—my trip’s most vivid mental postcards—qualified as danger, too. There must be engineers right now working to ensure that wallets are no longer lost, that thunderstorms no longer catch us unawares.

That’s what technologies are designed to do, after all—anticipate and resolve potential conflicts. This makes comfort easier to come by, but stories more difficult. As every fourth-grader knows, the essential ingredient of story is conflict. Without it, there is no story at all.

It’s an interesting trade-off to ponder. Take the cell phone—a personal problem-fixer. This tool has virtually eradicated all stories of planned meetings thwarted by misunderstanding. Or stories of a stranded motorist seeking help on a dark and stormy night. Of course, we know how that latter genre turns out, and given the choice, I think we’d all opt for a cell phone as characters in that story. When my gas needle withered toward empty in the desert, I felt no compunction at all about my cell phone slackening the narrative stakes.

Without a doubt, I preferred having the lifeline. But it’s also equally true that there are now some things I will never know: Had I run out of gas without a cell phone, what would I have done? Walk miles along the highway to the next town? Flag down a car for help? Take a ride from a stranger? What colorful character might I encounter? My first ever acquaintance with a big rig driver? An unsavory sort? Would I be scared? Resourceful? Would I be changed?

For better or worse, my cell phone pre-empts such blood-quickening stories. But it can’t solve all problems yet and, on the whole, I’d say we’re technologically at a point where opportunities for story can still be found. I’m more concerned for the day when we will be able to instantaneously see information about the world as we encounter it. This is the world of Google Glass and its progeny. In the not distant future, we will look at a building and see its history, know with one glance if a shop stocks the delicacy we’re searching for, pass a stranger on the public walk and see him in full Facebook profile. 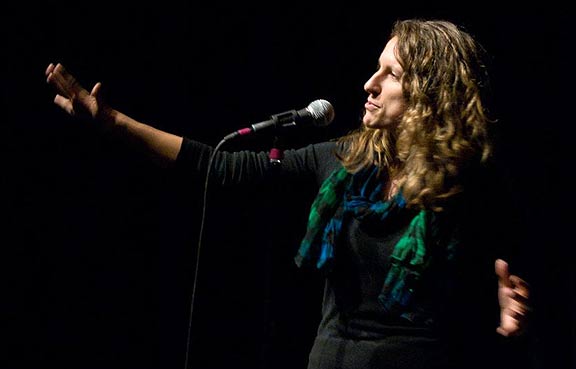 The erasure of mystery will present a formidable obstacle to story. Listeners follow a story precisely because they—and the protagonists—don’t know what will happen next. We humans may have our motives, but the world is not under our control. The drama, and comedy, emerges from our hapless attempts to navigate this contradiction.

But if we know before we ask, find before we seek, we can hardly claim to be protagonists. There will still be conflicts, of course, but vastly reduced and sanitized. I suspect they will be primarily interpersonal, and many of the sensory dimensions—the taste, smell, sound, feel, look—of our loves and hates will be mediated.

This presents another challenge to the storyteller. As more of our lives our conducted online, how do we tell the stories of what happens to us in this realm? I’ve already started encountering this problem in my own stories. I try to describe some key plot point that happened online and find myself grasping for absent sensory detail, leaning heavily on the action verb, “to click.” As settings go, the computer is hopelessly two-dimensional.

The most vivid, three-dimensional story that has stuck with me, of the hundreds I’ve heard at shows, began with this caveat: “Now this all happened in the ’70s and ’90s, before the internet.” The teller, a balding middle-aged man, told us that in his youth, he spent his summers busking as a clown in the public squares of Florence, Italy. One day, he said, a beautiful, dark-haired woman stood among the children watching his antics. Eventually, the kids ran home to their suppers, but she remained. They started talking, he invited her to dinner, the conversation sparkled, she returned to his apartment overlooking the piazza, they made love before the open window. Every night that week, the man slipped out of his clown costume, removed his make-up and rushed to their designated meeting spot to repeat their ritual. Until, at week’s end, she returned to her home in Buenos Aires.

Twenty years later, fresh off a divorce, the man was gripped by a desire to find the Argentinian woman again. Armed with only her name, he flew to Buenos Aires and dialed every name in the phonebook that matched hers. When that failed, he called every matching surname. Finally, he located a sister, who told him the woman lived in another Argentinian city, married with three kids. He hesitated, sitting in his hot hotel room in a foreign land. What should he do? Was this a fool’s errand? A mid-life crisis? The love of his life?

At the time I heard this story, I happened to be grappling with love myself, in the passionate throes of a new relationship. When I saw my girlfriend that evening, I took her into my arms and told her the story of the Italian clown. I recounted the moonlight of the piazza, the trail of his finger down the phonebook page, the sister’s voice delivering the news. I was telling her something of my own love, too.

I was telling her a story that could not happen again. That today, would be a Google search.

So. What if stories are more difficult to come by? Does it matter? Isn’t that a small price to pay to live in a safer, more comfortable world? I’ll leave a defense of narrative to a more articulate essayist than I. But as a storyteller, I can speak to the resurgence of oral storytelling in recent years. Thanks to organizations like The Moth, story slams have sprouted in major cities across the country. In Chicago, where I live, you can go out virtually any night of the week to see a live show of people simply telling stories.

These shows pull sold-out crowds. I’ve seen bars packed with adults, sitting and standing, listening in total silence. I did one show during the Polar Vortex—the wind chill whipping near twenty below—to a theater of hardy listeners. This regular Sunday night show happened to include a potluck, and as I watched people stream in from the cold with their hot dishes, I was struck by the obvious comparison to church.