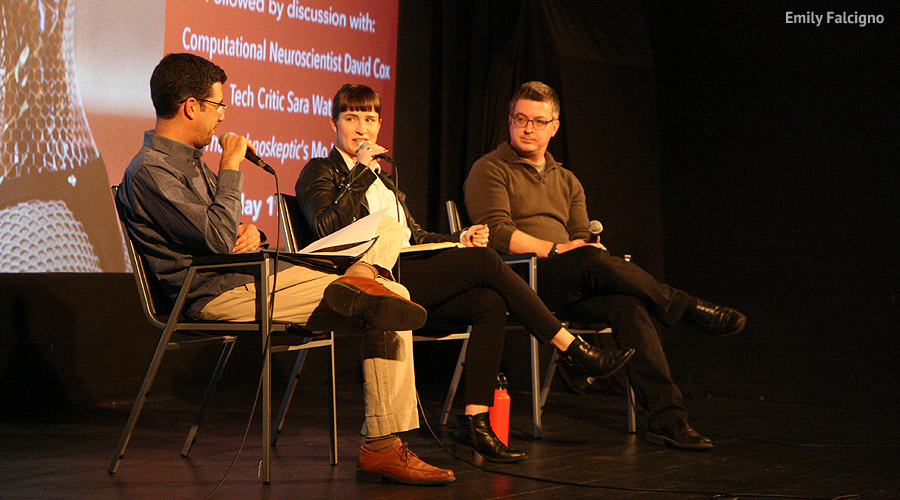 Superman and the Singularity

On November 9th, The Technoskeptic held it’s third event at the Brattle Theatre in Cambridge, Massachusetts. Alex Garland’s 2015 film Ex Machina was shown, followed by a panel discussion about artificial intelligence with computational neuroscientist David Cox and tech critic Sara Watson, moderated by publisher Mo Lotman. Both the movie and the lively discussion that followed explored some interesting philosophical and practical questions. What follows is a riff on some of the thoughts running through my mind after the screening. —TV

It’s hard to separate the mad rush to build humanoid robots from some of the deeper patterns in the collective psyche. One is the notion of the perfectibility of humankind. The late 19th century surfaced the Nietzschean notion of the Übermensch, which is often roughly translated as “superman.” A modified version of this meme appears in popular culture as Superman and Batman tropes, as Jeffrey Peters explored in his article “The Struggle between Superman and Ubermensch in Man of Steel.”

Arguably, the AI-android narrative takes a page right out of Nietzsche. In Thus Spoke Zarathustra, the central character defines Übermensch as nothing less than a goal that humanity should aspire to. Zarathustra also ties the concept to the death of God and the subsequent demise of human values. To avoid the pitfalls of nihilism, Zarathustra presents the Übermensch as the creator of a new value system that will ultimately be judged by how it advances a “new generation of humans.”

Sound familiar? I’ll go out on a limb and suggest that this narrative has a lot in common with Ray Kurzweil’s Singularity. Kurzweil’s widely shared techno-vision represents a philosophical underpinning for many transhumanist projects which are seen as the next step in the evolutionary cycle. But without going further down the Nietzschean rabbit-hole, let’s try a modest thought experiment: that the Silicon Valley quest to build such AI connects at some level with a meme buried in the Western psyche and mentioned earlier: the notion of human perfectibility.

Imbuing humans with greater capabilities through technological means could take the form of augmenting humans with artificial mind or body extensions, as transhumanist thought leader Elon Musk has proposed. Or it could mean creating a humanoid robot like Ava, the central character in Ex Machina. And it’s worth asking if another deeper motivation for creating a race of technologically-enhanced superhumans might hinge on the fact that humans, as currently constituted, have managed to make a hash of the planetary ecosystem (largely because of the chimera of technological progress). In one line of thinking, it could be seen as a form of expiation. 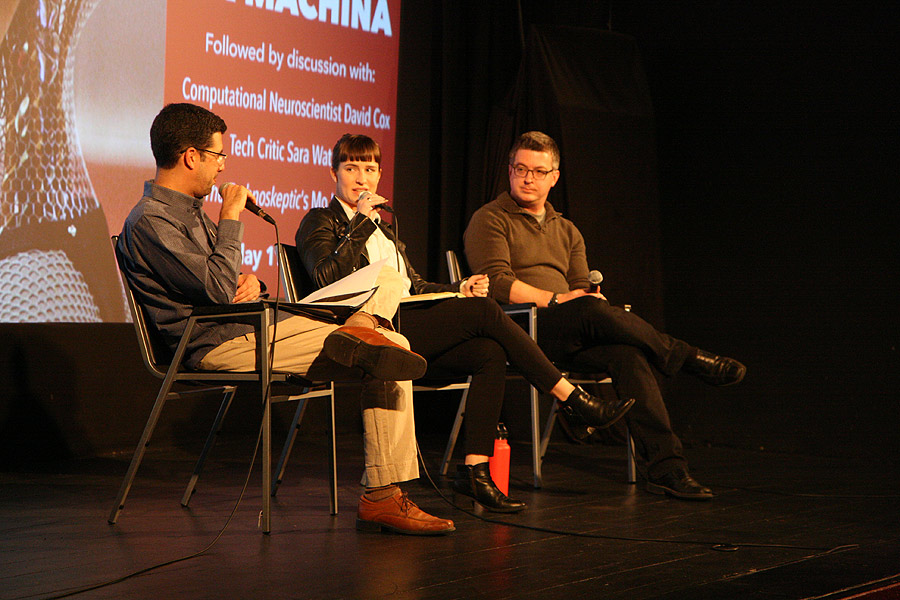 But what of ethical and spiritual considerations? Generally speaking, humans have three important classically defined dimensions: body, mind, and spirit. AI robots may mimic or surpass the first two via technological enhancement but will always be limited in terms of the third. It is in this third realm that much of the study and practice of ethics resides. Designers and programmers will likely never be able to create a true ethical sensibility and the more spiritual and creative aspects of human experience in AI. The rather damning logical conclusion of this is that such creations will be ontologically flawed from day one, even as they may make important contributions to various other human pursuits and endeavors.

As Thursday’s panel discussed, many will argue that ethical “capability” can be encapsulated in an algorithm, despite the fact that ethics debates have raged for centuries. Implicit in their “technology can solve anything” hubris is the notion that programmers themselves will act as the final arbiters of whatever ethical profiles are developed. But here’s the Catch 22: the programmer can only create something that already exists within the programmer’s mind.

In Ex Machina, we eventually learn that CEO and master orchestrator Nathan is himself ethically challenged. One of the many clever plot twists in the movie is that he has only managed to program Ava in his own image, thereby sowing the seeds of his own demise. It seems clear that the technologists working so feverishly on AI are likely to have more technological brio than ethical focus. Panelist David Cox seemed to suggest otherwise, but I’m not at all convinced. Many thoughtful and ethically astute scientists including Albert Einstein earned their keep by making nuclear weapons a reality, thereby opening a Pandora’s box that to this day continues to elude any meaningful resolution.