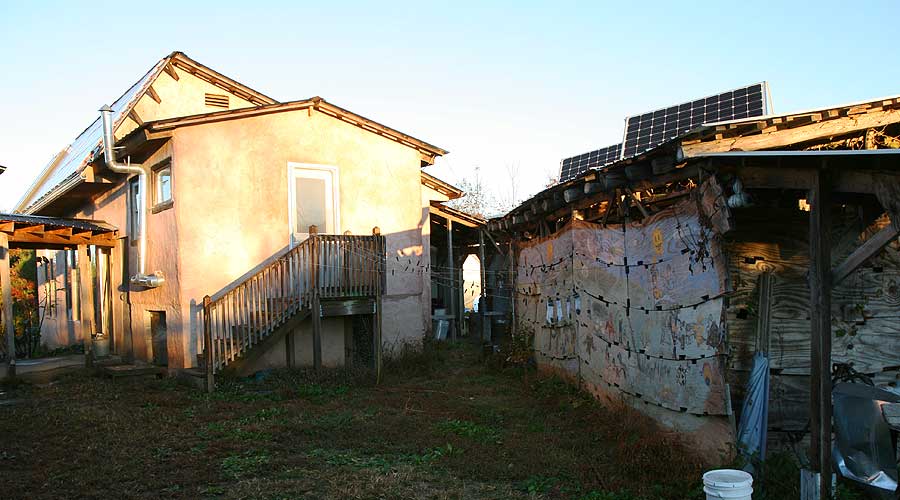 With the political ecosphere abuzz about divestment and life after fossil fuel, we have some sober questions to answer. Our food, water, and shelter remain very dependent on fossil fuel supplies. Even grid-tied solar power allows us to maintain modern comforts only at the cost of remaining dependent on coal, nuclear power, and fracked gas at night and in cloudy weather. And while cheap fossil energy flows like a river from our children’s inheritance, three-quarters of humanity still lives on less than five dollars a day. Can we really move beyond fossil fuel, and make it work for everyone? We can, but the answers lie more with the builders of community than with glitzy new machines.

My family and I live in a small community in Virginia called Living Energy Farm. LEF is attempting to put together an affordable renewable energy toolset that can work across the world. The surprise has been not how difficult this is, but rather how easy. But in order to understand how it works, we have to unlearn how we’ve traditionally thought about energy use, and let go of the idea of merely plugging renewables into existing infrastructure. Ever try to drag a car with a bike? Forget that. Unchain yourself, and enjoy sweet freedom and the wind in your face.

What this means in a practical sense is that renewable energy works fantastically well at the village level. The combination of an integrated community energy system (where one source of energy can fulfill the needs of many people) and a strong focus on good, conservationist design makes it possible to live gracefully, and cheaply, without fossil fuels. 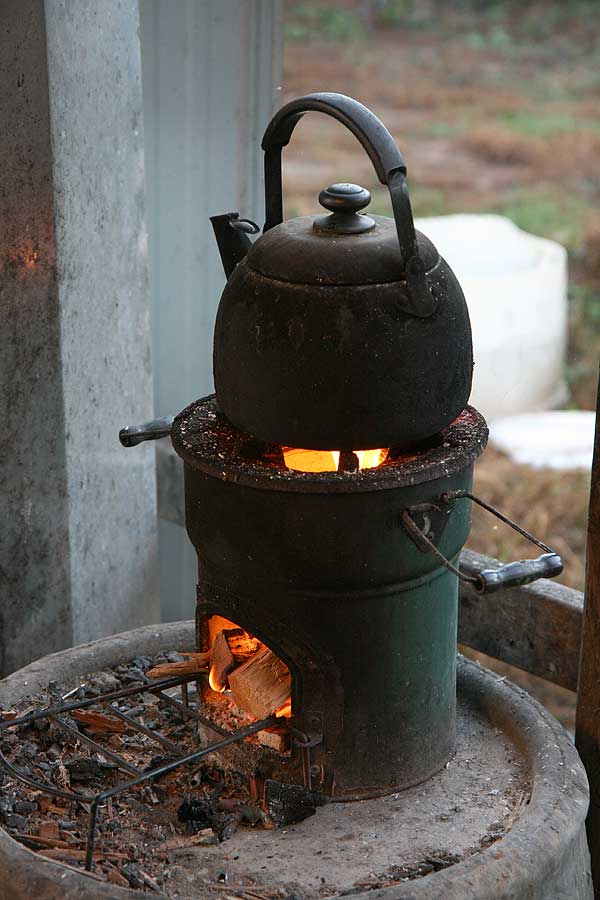 Cooking with a rocket stove.

Right now, renewable energy is being handled in the US by chaining it to the existing, fossil-fuel based economy. This means that we continue to imagine a centralized power grid made of AC electricity, which we expect to flow freely without limits at all times. The idea of sending electricity around on wires dates to the 1800s, long before photovoltaic (PV) panels. Power came from steam boilers that turned generators, which can make AC or DC power. But AC travels down long distance wires better, and boilers are expensive, which strongly favors centralized design.

High-voltage AC is powerful stuff. People can live in awful houses (from an insulation perspective) and invest their capital in maximizing square footage and aesthetic detail in an attempt to chase an ideal of wealth and status. Then they fill them with electricity-using devices. This is easy because the capital investment is at the power plant, and consumers pay in only small increments.

By contrast, PV panels are inherently decentralized and a very reliable, if variable source of energy. But tragically, instead of taking advantage of their inherent strength (the ease of getting off-grid power anywhere), we are treating them like boilers, aggregating them and using centralized AC systems that have to be oversized, fail easily, and encourage waste. Photovoltaics could radically re-orient industrial society, but only if we break from the consumer, boiler-powered model. 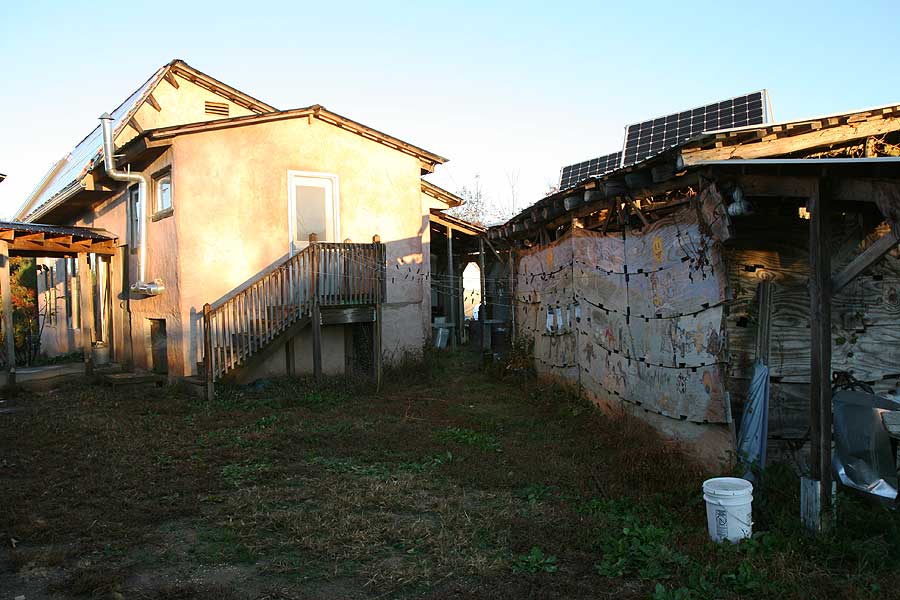 The kitchen and outbuildings at LEF 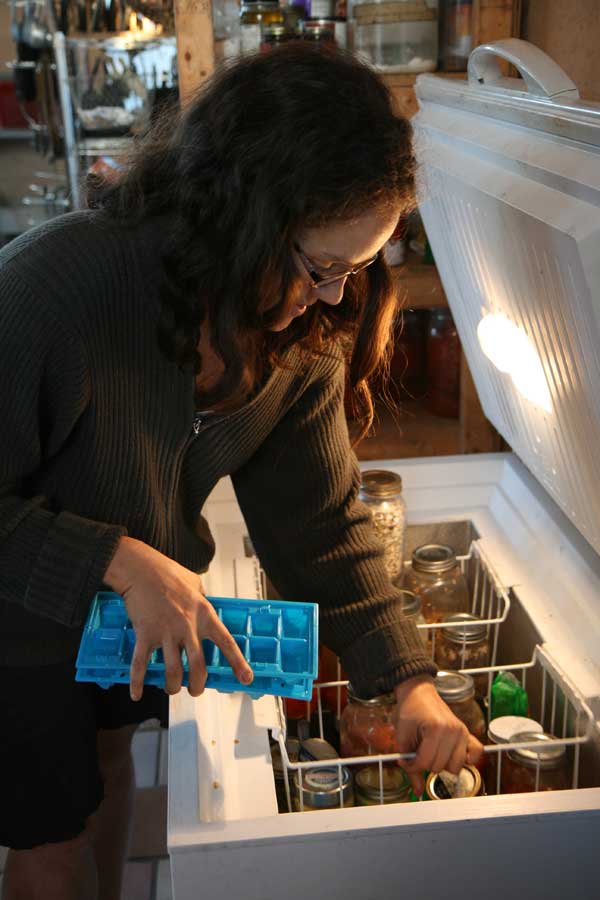 At LEF, we’ve done that with a multi-linear and fail-proof model which provides a high level of service. Most strikingly, it quickly re-orients community members to abandon their wasteful habits and adopt conservationist habits. Our biggest use of electricity is what I call “daylight drive” photovoltaics. We connect high-voltage industrial motors directly to solar panels. When the sun comes up, the motors run. When the sun goes down, the motors quit. It’s that simple. There are no electronics or computers involved, and the core components last for decades. Our daylight drive motors heat our buildings, and pump and heat our water. Our fridge is daylight drive, and so are dozens of other tools we use to grind grain, process farm products, and outfit a wood and metal shop to support the farm. Our buildings stay warm in winter and cool in the summer. We get to take a hot shower, surf the Net, or drink a cold glass of lemonade any time we want. And that’s on a budget of 200 watt-hours per person per day. (Most single family grid-tied systems are 5,000 watts or more, and still use grid power at night.) The magic is community—an integrated village energy system that makes use of small amounts of valuable electricity to leverage large amounts of cheap thermal energy. We maximize storage of heat and cold, and minimize electrical storage.

We have also learned to respect our elders. There is a fascination in our time with the magic battery technology that will allow fickle wind and sun to be tamed for bad weather. By chaining electrical storage to the old economy, we think we need a huge amount of electricity, and then we have to use high-capacity, disposable batteries to try to meet that need. Lead-acid batteries last about five years, lithium-ion batteries perhaps seven to ten. At LEF, we have a battery set that is one tenth the size of a normal off-grid house to power our DC LED lighting system. The technology we use is called nickel-iron, or NiFe. Thomas Edison himself developed the technology, and sold millions of NiFe batteries. We have one of his original NiFes, and though it is perhaps 100 years old, it still works. No joke. In a world hungry for high-density, mobile power, NiFes got pushed off the market (they’re bulky). We tried modern batteries, and got left in the dark. With NiFes, the lights never go out. Technology evolves toward profit, not durability. Sometimes the old machines are better. 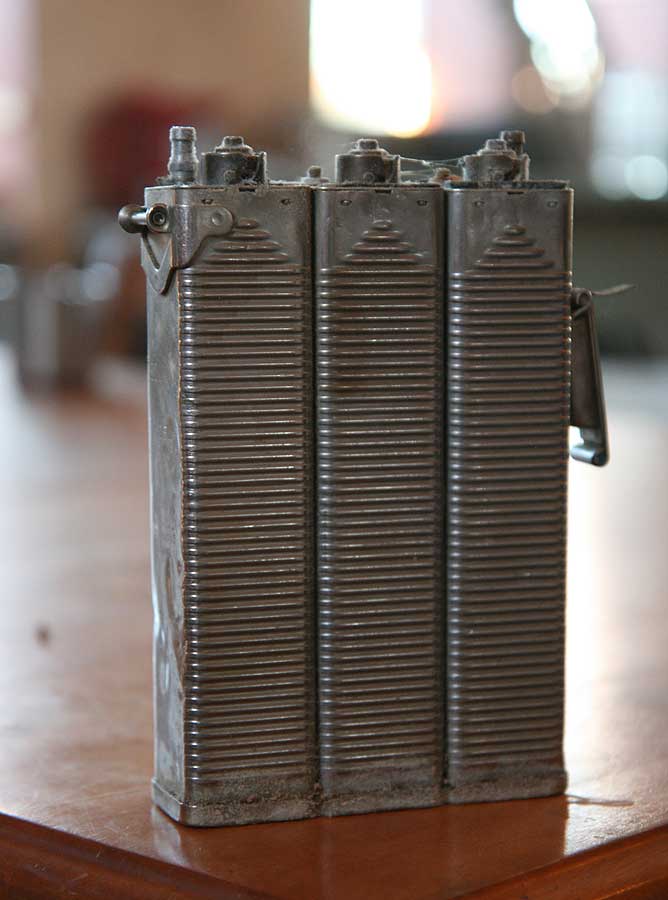 The struggle we face at LEF is not in making our sustainable energy systems work, it’s in convincing other people to join in our example. We get lots of eco-tourists and homesteaders looking at what we do, but the larger movement to fundamentally change how we live has not yet crystalized. If we are able to spread what we are doing, then people all over the world will be able to live and live well without nuclear power, coal, oil, or fracking. We have to choose community, take responsibility for our role in that transition, break the chains, and enjoy the wind in our faces.