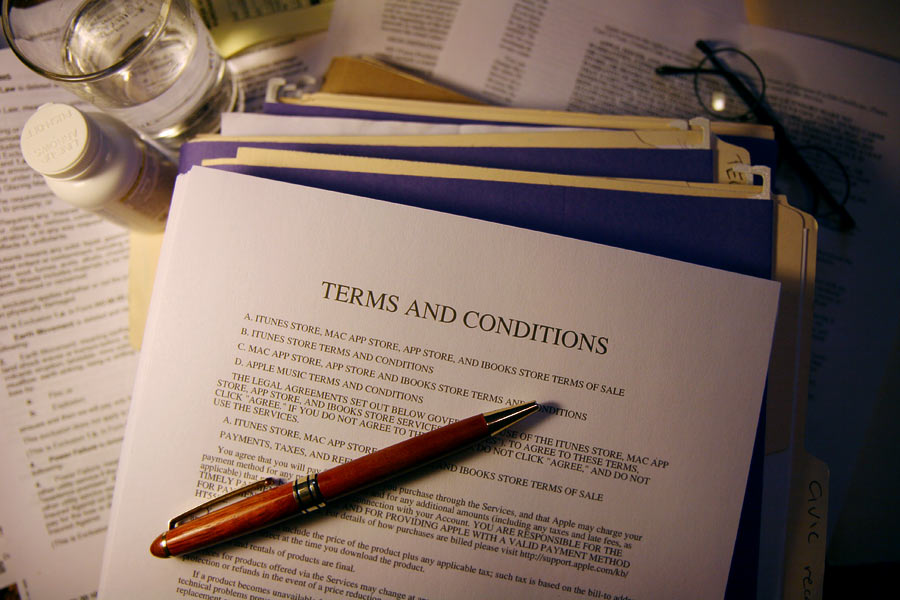 Terms of service (TOS) and end-user license agreements (EULAs) are typically thousands of words of dense text that tell you the many ways that you’re at the mercy of the website or software developer you’ve chosen to deal with. Sometimes, however, there actually upsides to reading these agreements.

Recently, when the video game developer Larian Studios released Divinity: Original Sin Enhanced Edition, its agreement included a paragraph stating, “A special consideration in material or immaterial form may be awarded to the first 100 authorized licensees to actually read this section.”

Those lucky (or bored) gamers who actually read through the agreement to find this clause were reportedly rewarded with free game downloads from Larian.

While it’s much more likely that you’ll cure insomnia by reading a EULA or TOS than end up with free stuff, Larian’s experiment is a good example of the sometimes strange clauses hiding in these agreements. That’s why it’s important to understand how they might affect you.

Facebook and Copyright
Facebook has long been an echo chamber of inaccurate information both about its own policies and the world at large. According to some chain-mail-style posts that periodically make the rounds on the site, you basically sign away your soul as soon as you join. In truth, Facebook’s TOS isn’t nearly that draconian, but it doesn’t exactly recognize you as the owner of everything you post either.

Facebook has actually made a good effort to keep its TOS short, easy-to-understand, and readily accessible. Their Statement of Rights and Responsibilities states in part:

What this means is that if you make some amazing new cat meme that you might be able to license on t-shirts and merchandise for millions of dollars, but you post it to Facebook first, you’re giving Facebook permission to freely re-post it as the site sees fit (unless you can quickly get everyone to delete it). Your hilarious cat meme could technically become the new mascot of Facebook under this scenario, and Facebook wouldn’t have to pay you a dime for its use. However, you would still own the copyright to use this cat however you see fit in other media.

So while Facebook is technically allowing you to keep ownership of what you create, it’s also becoming de-facto co-owner of your copyright unless you can convince everyone else on the site to delete your creation. Given how things posted on the Internet tend to stick around forever, good luck getting that to happen.

And if you have a problem with that? Well, let’s hope you live in San Mateo County, California, because that’s the only jurisdiction whose courts will hear your case under Facebook’s policy, and courts have a very favorable view of forum selection clauses like this. No amount of copying and pasting chain-mail statuses is going to change that. The only way to fully opt out of these terms is to stop using Facebook altogether.

The Legal Standard
If that sounds unfair to the average user, it’s because it is. And while you’re free to challenge Facebook’s TOS in court, it’s more likely that the court will side with Facebook.

The Supreme Court hasn’t yet ruled on the enforceability of TOS agreements, but several appellate courts have, and the general consensus is that regardless of how long and complicated these agreements are or whether you’ve actually read them, they’re enforceable.

One of the most notable recent cases, Nguyen v. Barnes & Noble, came from the Ninth Circuit Court of Appeals last year. Kevin Khoa Nguyen’s issues with Barnes and Noble started when the bookseller cancelled his online order for two HP Touchpads. While most people would have let this go or complained to customer service until they gave up a $20 gift card, Nguyen took Barnes & Noble to federal court and initiated a class-action lawsuit.

A link to the terms of service that Nguyen probably didn’t read was located at the bottom of every page of the site, and the agreement actually required his suit to go to arbitration. But Nguyen didn’t actually have to click anything to prove that he knew about the agreement. The court held that because Barnes & Noble couldn’t prove that Nguyen had either actual or constructive knowledge of the terms of service, there was no enforceable agreement, and thus he couldn’t be forced into arbitration.

So while Nguyen was a rare win for the little guy, keep in mind that the courts don’t care how dense the TOS is, or if you’ve actually read it. The case also gives companies a roadmap to ensure how their agreements are enforceable: make the terms of service so conspicuous on the website that there’s virtually no way that a reasonable person could argue they didn’t see them, and make them click on something that effectively acts as a signature.

So next time you have to scroll through several thousand words and click a couple boxes to do virtually anything on the web, make sure to thank Mr. Nguyen.

Further Down the TOS Rabbit Hole
Like pretty much all TOS agreements, Facebook’s gets a lot of flak because people don’t actually read it. Among the major website TOS out there, it actually is pretty short (clocking in at 3,208 words), and most of the language isn’t terribly difficult to understand.

On the other end of the spectrum is the 20,661 monstrosity of legal jargon that is the iTunes user agreement. For a little bit of comparison, the Declaration of Independence is only 1,458 words, and the U.S. Constitution without amendments is 4,543 words. It literally requires less legal language to create an entire country than it takes to buy a digital license to listen to Adele’s new single.

Among the provisions in the iTunes user agreement are those stating that you can’t do anything to Apple if you lose your downloads for any reason (even if they arbitrarily decide to remove them), you can’t hold Apple liable for failing to keep safe any private information that you transmit to it, like credit card numbers, and you can’t use iTunes for “the development, design, manufacture, or production of nuclear, missile, or chemical or biological weapons.”

They’re especially serious about that one. Your iTunes account is toast if you even think about listening to “Ride of the Valkyries” while building your homemade nuke.

What’s a User to Do?
Though the TOS for a program like iTunes seems overburdensome, not even the dumbest attorney would recommend that a company like Apple completely do away with it. A lot of the information is basic copyright law that protects Apple from frivolous lawsuits. Sections that hold Apple harmless when you lose access to your account aren’t all bad.

Yes, Apple could theoretically target you tomorrow, delete every purchase you’ve ever made because they don’t like your last name, and you’d have little legal recourse. But doing that is just bad business. Clauses like that are in there more to protect Apple from nuisance lawsuits, like when your grandmother seeks thousands of dollars in damages because she downloaded a $5 Frank Sinatra album three years ago and can’t figure out how to get back into her account.

It’s really the same principle that prevents you from suing Best Buy because you cracked your new CD. There’s no reason to hold the merchant liable for user error.

On the other hand, it’s impractical to expect most users, many of whom don’t have high school or college degrees, to read and understand 50 pages of legalese. Hell, even most lawyers don’t read that stuff unless they have to and someone is paying them at least $150 an hour to do it. Nonetheless, it’s unlikely that American courts will change how they view these agreements anytime soon.

The best solution to avoid problems with TOS agreements is probably what the average person least wants to hear: don’t use the service. But if you feel you must, use a little common sense. Think about why you’re using a site. Skim these agreements to see if something might affect you, or even pay a lawyer a few bucks to do it (there are lots of us right now who could use the money!). If you’re using Facebook to advertise your original art, post links to your own site rather than post it directly to Facebook to avoid the worst-case scenario where Facebook would re-use your content.

And if you want to put a music player in your homemade weapons of mass destruction, for God’s sake, use Google Play or Amazon.

Warren Christopher Freiberg is an attorney licensed to practice in the state of Illinois.