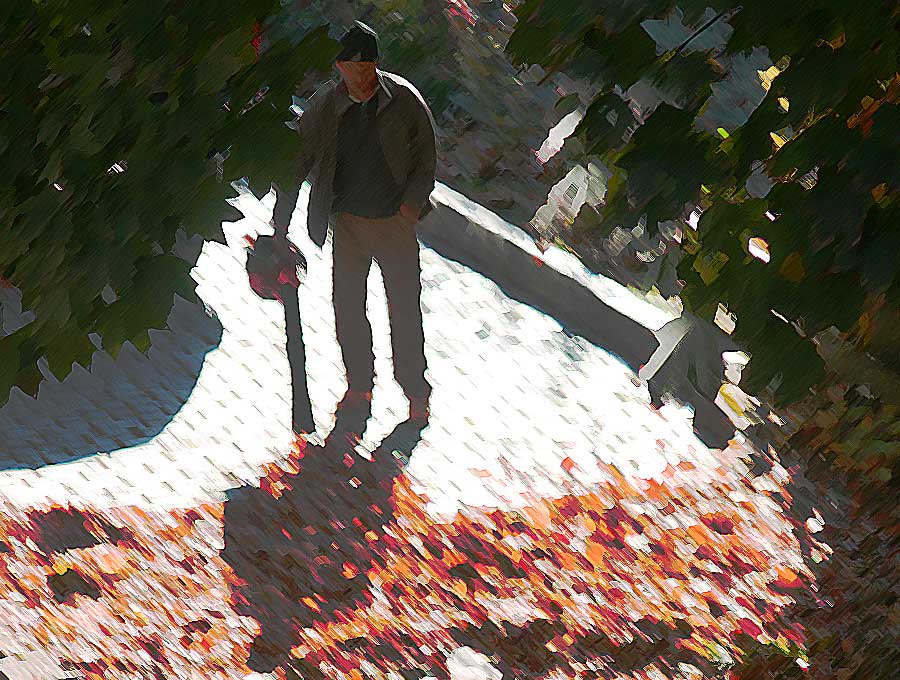 It’s like shooting a cannon at a mouse…or riding a motorcycle to second base. Can there be any more apt demonstration of the word “overkill” than aiming screaming 175-mph columns of air at a two-inch deep dusting of featherweight, desiccated leaves? Yet somehow the leaf blower has managed to become a near-ubiquitous accessory to modern life, coloring autumn in unexpected ways. When long ago, humans thought drudgery would finally be vanquished by technology, this cannot be what they imagined. Raking leaves, for one thing, is not even unpleasant—it’s hardly like, say, hand-washing cloth diapers.

It is fashionable to be environmentally conscious these days, yet even our city governments are engaging in one of the most environmentally hostile practices imaginable. First, there is the close-range 70-decibel whine of the engine, enough to cause hearing loss in the operator. Then there is the mushrooming cumulus of particulate matter leaf blowers produce, which includes “dust, fecal matter, pesticides, fungi, chemicals, fertilizers, spores, and street dirt which consists of lead and organic and elemental carbon,” as an Orange County, California, Grand Jury reported.

Then there are the emissions. Two-stroke engines, which power most leaf blowers, release up to 30% of the fuel mix unburned into the air, as a 2000 California EPA Air Resources Report reminds those of us without noses. The car rating site Edmunds did a thorough emissions comparison of a gigantic Ford Raptor pickup, a tiny Fiat, and two different leaf blowers. The leaf blowers were by far the worst offenders: “To equal the hydrocarbon emissions of about a half-hour of yard work with this two-stroke leaf blower, you’d have to drive a Raptor for 3,887 miles, or the distance from Northern Texas to Anchorage, Alaska.”

But wait a sec, is a leaf-blower even that much faster than a rake?

Maybe not. According to the organization Zero Air Pollution Los Angeles (ZAPLA), one of their volunteers—a grandmother—took part (unofficially) in a 1998 test by Los Angeles’ Department of Water and Power, timing various models of electric and gas blowers. Her rake took about 20% longer than the professionally-operated gas blower and beat all the other models. Steve Fagin, wielding a rake in an entertaining online video of a similar contest says, “contemporary culture increasingly relies on machines and technology to perform simple tasks once accomplished with hand tools, more efficiently economically, with greater environmental sensitivity and less noise.” He beat the leaf blower by quite a large margin.

Those are hardly scientific surveys, but a cursory glance at any leaf blower in action calls into question their speed advantage as well as their labor-saving prowess. If you are trying to generate deafening, thought-stopping noise, then leaf blowers are awesome. As tools go, though, they are just not that impressive. That’s probably why—even as their use has multiplied—they have been singled out for restrictions.

Leaf blower bans got a toehold, primarily in California, not long after the leaf blower came into existence. According to the California EPA report, there was already a ban in Carmel by 1975. By 1990, 20 communities in the state had placed restrictions on leaf blowers, and now there are even more locations, including Los Angeles. The restrictions vary from place to place; some are seasonal, some are restricted by time or day, some by type of leaf blower. But a few towns, like Los Gatos, Los Altos, and Santa Monica have outlawed all leaf blowers, all the time.

Perhaps inspired by these, communities in other regions (for example, Wilmette, Illinois; Yonkers, New York; and Arlington, Massachusetts) have attempted restrictions. If Arlington—just north of my home in Cambridge—could be successful, perhaps a cascade of similar regulations would eventually result in a statewide ban, or at least shift the tide against the proliferation of these devices. So I hoped.

The reality has been a lot more discouraging. Many towns opt for seasonal bans, which sounds great until you realize the banned season is summer, not fall. For those of us in temperate climates, this is akin to outlawing sledding in July. Even with the most modest restrictions, there can be loopholes, political jockeying, and enforcement problems. Despite passing a seasonal ban in three straight votes (a regular town meeting, a special election, and a special town meeting), Arlington watered down its restrictions to the point where they are nearly meaningless.

“It’s banned on Sunday mornings, big whoop,” said Carol Band, a town meeting member and committee member who had pressed for stronger regulation. Band described a process where selectmen seemed determined to defang the restrictions, calling for the multiple votes in hopes of getting the outcome they wanted, and then after that failed, setting aside most of the restrictions anyway. “All our hard work was eliminated in the back room,” Band said, saying that “the landscapers are in bed with the powers that be.”

Portland, Oregon, opted for an approved leaf blower list, which as you might imagine gets arbitrary and confusing in a hurry. How is anyone to know what leaf blower is blowing when they think about lodging a complaint? How would this be enforced? Does the list change every year? These types of regulations inevitably engender the ire of certain elements in the pro-blower crowd, as demonstrated by online comment gems such as this one by “billy bob” on the city of Portland website (typos are original): “i have a 20 year old blower that still works like brand new ,and if its too loud for you then give me a brand new one or put tampons in your ears and shut up.”

Even in Santa Monica, where there’s a total ban, enforcement has been difficult, according to Dean Kubani of that city’s Office of Sustainability and the Environment. At first it was handled by the police, for whom it was a very low priority. After residents complained, Kubani said there was a period of improvement. “City Council modified the ordinance to make not just leaf blower operators liable, but also homeowners and landscaping companies, as a way to make it easier to issue a citation.” Enforcement was transferred to Kubani’s office and they were able to keep better tabs on violators. But the time and expense involved proved to be too much, he said, and implementation has since declined.

But let’s step back a bit. This is not just about leaf blowers. It’s about the relentless and thoughtless pursuit of technologies to accomplish what we can do best with the skills and materials of our great grandparents. These technologies don’t merely rob us of the ability to appreciate the relative quiet or the satisfaction of doing something with our hands. They have unintended consequences that are sometimes even worse.

In this particular case, gas-powered machinery has redefined property management and lawn care. Without these tools, the idea of having enormous putting-green lawns doesn’t make sense. Removing every leaf particle from a park is as unnecessary today as it was 100 years ago. But instead of being an odd habit of the obsessive-compulsive homeowner, it’s now a “best practice” of city government and suburban neighbor alike. These tools alter our infrastructure—both physical and societal—in ways that reinforce the technology. In other words, invention is the mother of necessity.

It would be easy to get discouraged, but Arlington’s Carol Band, at least, hasn’t given up. “People are talking about it way more than they did before…I guess that’s how it starts.” Whether leaf blower restrictions are at the forefront of a slow-building trend or a failed experiment by a few outliers is yet to be determined. You and your community can help ensure that it is the former. These machines are incredibly disruptive, unconscionably polluting, and rather ineffectual to boot. If you agree, raise the issue with your local representatives. Push for restrictions that are easy to enforce, like total bans and extending responsibility to homeowners who hire gardeners who use leaf blowers. Insist on a dedicated enforcement mechanism that has a revenue stream (like citations). Stand by those representatives who support you, because there will inevitably be pushback. And for the love of God, use a rake.