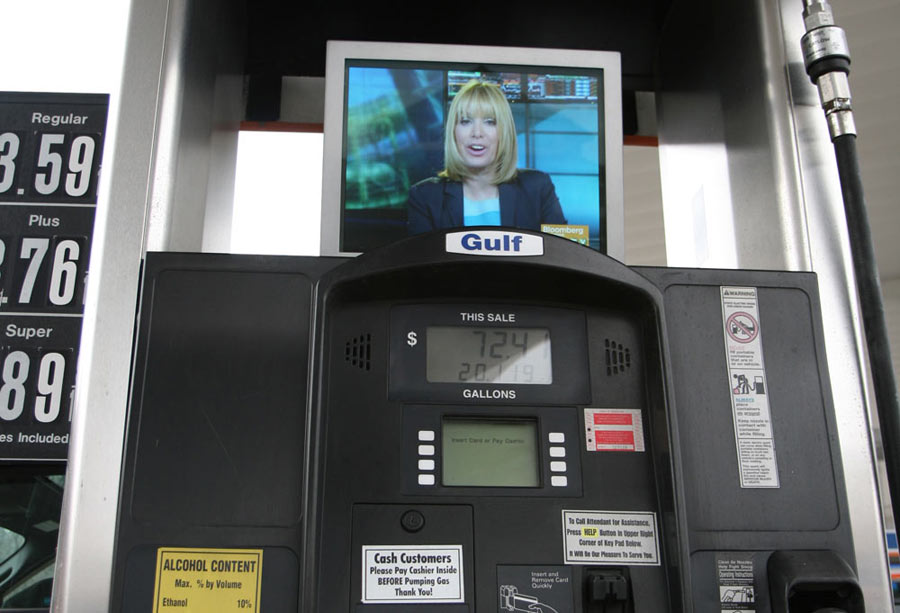 Your Media Diet, Now With Gas

Pumping gas is not something that I particularly relish, but on the list of modern-day inconveniences it ranks pretty low. Sure, the service station milieu is not exactly an aesthetic wonderland, but at least the experience offers an opportunity to stretch your legs and have a quiet moment to yourself.

That’s what I thought anyway, until I pulled into the Natick rest stop on the Massachusetts Turnpike. Where one once heard the quiet whirring of mechanical readouts or the hushed whoosh of fuel flowing through a hose, there was now the high-decibel carny-barking of one of those over-produced sports shows, where football players wear ties and logos make noise. In short, there was a TV on my gas pump.

At first glance, this might seem to be a trivial issue. After all, how long are you pumping gas? The answer to that question is between four and five minutes. I know that because that’s the length of time that marketers, who carefully assessed how much money they could earn from your captive eyeballs, make their video loops.

The thing to understand about TVs on gas pumps, or in most other public places, for that matter, is that they did not come about because people were clamoring for TVs in these places. Nor even were gas stations. Rather they are the product of marketing agencies in the sector called Digital Out-Of-Home, or DOOH. That the acronym for this questionable service evokes both a Homer Simpson expression and dog excrement seems merely coincidental.

What DOOH does is create a network, usually a pastiche of short-form content mixed with targeted ads, and put it in places that you just happen to be when you are not at home. This network is an advertiser’s dream, because it often has one unique characteristic that separates it from ABC or the Discovery Channel: you can’t shut it off.

“The customer is tied to the screen with an eight-foot rubber hose for five minutes,” said Gas Station Television’s chief executive David Leider, in one 2008 AP story. When the main method for delivering messages requires that the recipient literally can’t get away, it sort of calls into question any skill one might have in the persuasion department.

But of course Gas Station Televison (GSTV) and its competitors aren’t trying to persuade you of anything at all. DOOH marketers just need to convince advertisers your looks are worth money. Enough money that they can afford to install and maintain all the expensive hardware at no cost to the gas station. What’s in it for the station? They get free ads on the network, which drives foot-traffic into their convenience store to ostensibly buy a few more Snickers.

While the true origin of TVs on gas pumps is a little murky, the idea goes back to at least 1994, when 5” mini screens were tested by Shell and Exxon among others. There were a number of later attempts in the late 90s and early 2000s by marketing companies, such as Video-at-the-Pump. But GSTV’s rollout of several hundred 20-inch HD screens in Dallas, Houston, and Atlanta in 2006 seems to be the inflection point signaling the industry’s mature phase. 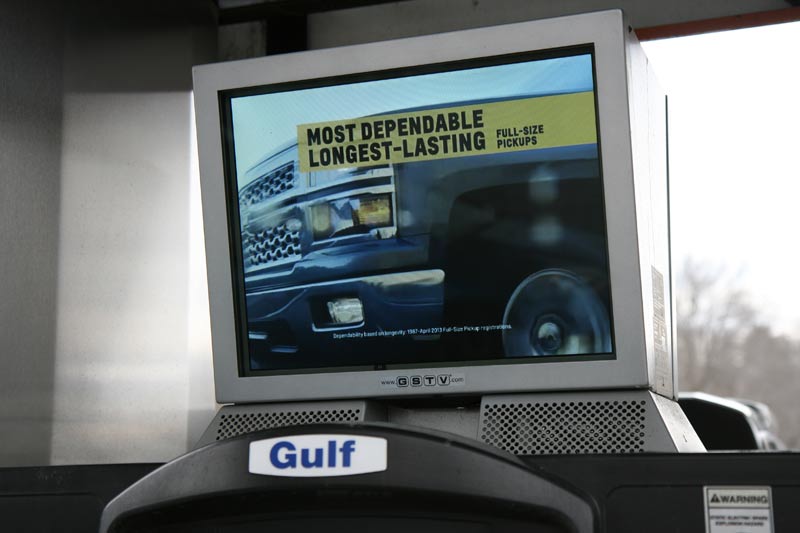 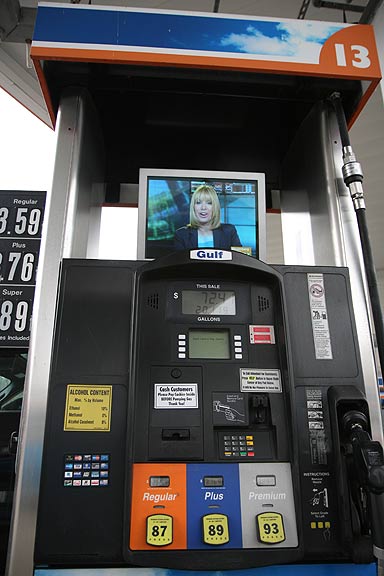 Like most industry titans, Gas Station TV has a main rival: Outcast. GSTV is now claiming 45 million monthly viewers, Outcast 36 million. In just the last few years the number of gas pump screens has exploded and is now in the tens of thousands, in hundreds of markets, and in most states in the union. It’s quite possible you haven’t yet encountered this phenomenon; the numbers still represent about 4% of service stations. But given that both companies have partnered with fuel pump manufacturers—Outcast was just acquired by the world’s largest—you can expect that to change.

The viewership, now measured by Nielsen and in certain demographics, competitive with traditional media, mean big business. And that’s just the thing: TVs on gas pumps isn’t a fill-up add-on; it’s a business.

The people entering into the business arrangement are the DOOH marketing agencies like GSTV, media content providers like ESPN and AccuWeather, advertisers, and gas stations. The person missing from that list is you. That’s because unlike standard television or even radio, you have no real agency in this transaction.

In the traditional, home use of television, we all entered into a bargain with programmers. You give us interesting content for free, and we’ll watch the relatively brief ads that appear interspersed throughout. People may not have liked advertising much, but it was a conscious choice to turn the tube on to begin with, and the exchange was often worth it. That model was so understood that when cable TV became mainstream in the 1980s there were no ads on it at all, since it was presumed your bill was payment for the content.

Ultimately the problem with putting a TV on a gas pump, on an elevator, in a waiting room, in the airport, in a subway, in a taxi, or at the deli counter is that no one agreed to the exchange—or even to watch the supposedly desirable content that the ads are interrupting. In other words, if you are in that space, you are being forced to experience TV programming. At the very least, this is presumptuous. At worst, it is a violation of your personal space.

Many of us can usually escape this particular injustice by avoiding gas stations with TVs. For now. But what if you take public transit? In that case you may have no choice at all. That’s what we’ll examine in the second part of this series.

NEXT IN THE SERIES: TRANSIT