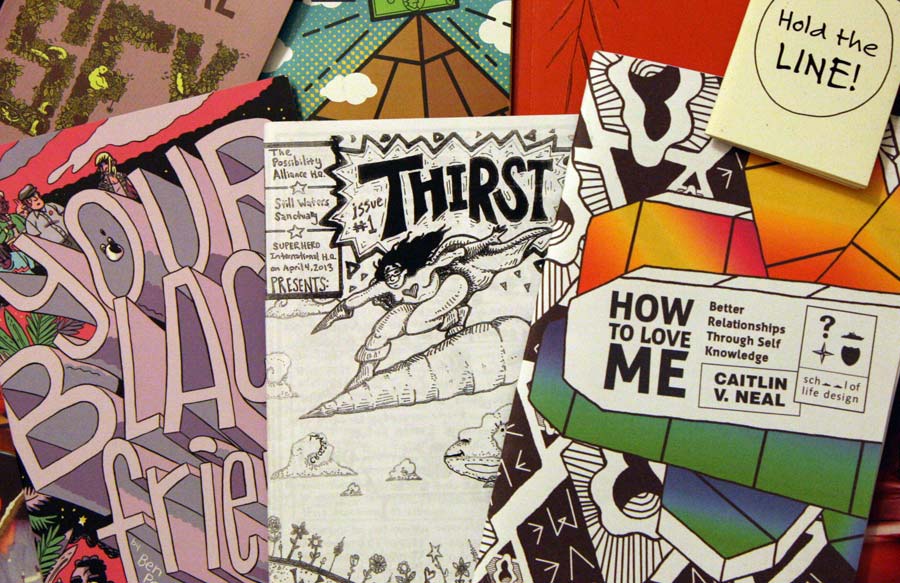 After a period of struggling sales, print media appears to be making a comeback. Indie publishing presses, such as the US-based Graywolf, have been growing in number and commercial success for the past five years, the magazine industry is experiencing a significant resurgence of interest, and newspapers, though still largely reliant on digital subscriptions, have not yet succumbed to predictions of extinction. Brick-and-mortar bookstores are enjoying so much renewed attention that Amazon, whose CEO once claimed that “physical-world retailing is a cagey and ancient business,” has opened up a number of real-world locations, with more to come by the end of the year. This cross-medium return to the printed word may not fully signify a turning of the digital tide, but it’s possible that it represents a renewed appreciation for media as physical objects, rather than something to be solely consumed online.

In the midst of this renaissance is one form of print media that has never had any trouble bouncing back from the effects of the Internet and has in fact remained resolutely analog, untroubled by things like ad revenue and industrial printing costs. Zines, the flimsy cut-and-paste booklets beloved by punks and radicals, are an anachronistic form of media on topics as unrelated as leftist theory, herbal medicine, noise metal, and bike maintenance. Theoretically, zines should have become victims of the Internet long ago. Their purpose—to create and distribute content intended for a niche audience—seems easily displaced by blogs and social media, and it’s true that zine activity briefly died down when attention turned to forums and personal web pages in the late 90s. But the new format didn’t stick. Since then, zines have become as fashionable as ever, with zine fairs, zine stores, zine libraries and zinesters using the Internet to network and share their work on a global scale. There is not a firm number on precisely how many zine fairs (gatherings of varying scales at which zinesters will sell their wares and meet other artists) exist, but Canadian zine magazine Broken Pencil has compiled a list over a hundred such events across the world, from the US to Indonesia to Tasmania.

To examine why it is that zines have survived with relative ease when other established forms of print media have struggled, it is helpful to consider the current upward trend of magazines, their mainstream cousins and partial namesakes. Sarah Penny, editor of trends website Fashion Monitor, claims that the fresh interest in magazines is due to a shift in the political environment, which has led to a desire to for analysis from reputable sources.

“I think that we can all agree that the past 18 months have been pretty tumultuous within current affairs,” she told the BBC. “With the likes of Brexit and Trump’s election, the unsettled nature of society drives readers to seek out factual news and understand the effects on the economy for themselves from reputable titles that have an authoritative voice.”

Similarly, zines tend to thrive when social conditions necessitate a need for independently crafted and diverse media. Though they have been present as a form of expression since at least the mid-20th century, zines have always been most popular when the surrounding culture has lent itself to political rebellion, such as with the explosion of punk movement in the 70s or riot grrrl culture in the 90s. Their attraction for political means is partially practical and partially ideological—zines are cheap and easy to produce, but they also represent a form of media with no middleman, where people who want to talk about their ideas can do so without going through the filter and potential censorship of a larger publication. They have been particularly utilized by marginalized communities for this reason, and at any given zine fair you will no doubt find an abundance of printed pamphlets on racism, LGBTQ+ issues, feminism, and many other social movements.

It should come as no surprise, consequently, that zines have navigated successfully into 2017, where a large segment of political opinion appears to be shifting to the far right and the phrase “fake news” has become an overused, unironic signifier of the times. Zines can represent resistance to mainstream media, a symbolic rejection of professional networks that don’t share the creator’s values. Many zinesters find it empowering to have full ownership over their platform, something that social media and hosted blogs cannot offer. They may only be folded pieces of paper, but to many, zines are not only an alternative to the impersonal nature of online media, but a historically appropriate form of political dissent. Ever since January, anti-Trump zines have become a regular sight at protests, proving that there is still some rebellious clout to the form.

Zines also carry a degree of personal accountability and authorial integrity that is sorely lacking from today’s online media climate. The 2016 presidential election highlighted social media’s part in raising the profile of sensationalist sources such as the now-infamous Breitbart News. Couple that with clickbait-style writing which has become increasingly popular even with reputable publications, and you have trends that have made it more and more difficult to truly distinguish informative journalism.

On top of this, the demand for instant analysis of current events has left to a certain homogenization of political commentary—an opinion piece published by The New Yorker on a Monday morning may well have its core argument (and accompanying buzzwords) repeated verbatim by five other major outlets by Wednesday. NYU journalism teacher Jay Rosen has pointed to this phenomenon on his own Twitter feed, noting that a New York Times political commentary making the claim that Trump is an “independent” president was echoed almost word-for-word by Washington Post and Associated Press journalists in just ten hours.

To some, zines are an antidote to this culture of unreliable media immediacy. From conception to reader could take weeks, months, or even years. They are rarely topical, have no higher authority to answer to, and are explicitly not marketed towards a broad audience. You cannot scroll past them, and sharing them with your friends requires a conversation rather than the click of a button. They are the opposite of fast news: reflective and personal, with a focus on the minutiae of life that large-scale publications may pass by.

Zines also offer a definable culture for zinesters to engage with, and one that can be sought out in physical spaces on a regular basis. The majority of these spaces are generally volunteer-run, semi-regular events that take place in community halls, church basements, and other obscure and out-of-the-way venues. Though they can range in size and style, each one is bound to draw out a city’s zine fanatics, bringing them together to celebrate the contemporary face of zine culture. Without spaces to draw an audience, zinesters would never receive the foot traffic that they need to sell and share their creations. As most forms of media have increasingly become online ventures with little real-world community, this is something worth preserving.

Such spaces do not maintain themselves, and for those who want to see zines continue into the coming decades, a great deal of work is required. Zines are not an especially profit-making entity, and the vast majority of people who are involved in setting up zine fairs are volunteers, working with money sourced through crowdfunding or larger community organizations. While a small amount of cash might be recuperated through entry or vendor fees, many zine fairs choose to use a voluntary donation or PWYC (pay what you can) system in order to make their spaces accessible. In addition to finding funding, zine fair organizers must create promotional materials and spread them around online and in their local area. Since the legality of unauthorized postering can vary from city to city, zine fair organizers often need to go wheat-pasting under the cover of night. The labor that goes into organizing a zine fair is no less strenuous or complex than any other kind of event planning, and yet it is done every year all over the world for free, purely to sustain and celebrate zine culture. Such events are as essential and necessary for zinesters as trade shows are for traditional publishers, and even the smallest of zine fairs can normally guarantee a healthy turnout. If you build it, they will come.

There is no real way to know whether zines as craft items and objects of creative expression will endure in years to come. It seems possible that they will be usurped by a newer, different form of media in the future, but the fact that they have survived the Internet up to this point suggests that such a replacement will come from artistic evolution rather than forced obsolescence. For the moment, a lively zine culture is thriving in many different corners of the world. If you are interested in learning how zines have adapted to the 21st century, consider seeking out your local scene—keep an eye out for posters advertising radical book fairs or alternative print fairs, dig through the small pamphlet sections of record and bookstores, or use online zine network listings such as the ones maintained by Broken Pencil or Stolen Sharpie Revolution. And if your local scene doesn’t exist yet, consider going DIY and starting your own.